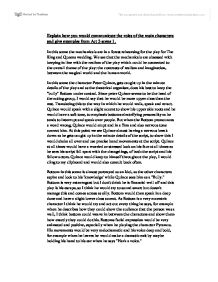 Explain how you would communicate the roles of the main characters and give examples from Act 3 scene 1. In this scene the mechanicals are in a forest rehearsing for the play for The King and Queens wedding. We see that the mechanicals are obsessed with keeping in line with the realism of the play which could be connected to the overall theme of the play: the contrasts of realism and imagination, between the magical world and the human world. In this scene the character Peter Quince, gets caught up in the minute details of the play and as the theatrical organiser, does his best to keep the "bully" Bottom under control. Since peter Quince seems to be the head of the acting group, I would say that he would be more upper class than the rest. Translating this to the way in which he would walk, speak and re-act. ...read more.

Bottom in this scene is almost portrayed as an Idol, as the other characters aspire and look to his 'knowledge' while Quince sees him as a "Bully." Bottom is very extravagant but I don't think he is financial well off and this play is his escape, so I think he would try to sound smart but doesn't manage this and comes across as silly. Bottom would then speak in a deep done and have a slight lower class accent. As Bottom is a very eccentric character I think he would try and act out every thing he says, for example when he describes how they could show the audience that the person was a wall, I think bottom could weave in between the characters and show them how exactly they could do this. Bottoms facial expression would be very animated and positive, especially when he playing the character Pyramus. ...read more.

He is completely captured by Bottoms performance, that he doesn't realise that it is his line. When Bottom appears with as an ass, the whole scene is turned into chaos. This is a very comical scene so I would have Snout, a shy character, faint into the shaking in fear, Starvelings arms. While Snug would just stand there, too petrified to move point and scream hysterically. Quince would be shaking and Flute not being that bright would start running in circles and when he bumps into Quince, be frightened and jump into his arms. Quince not being able to hold his weight would fall and both would struggle to get off stage. Bottom in the midst of this would be very confused and would start to scream and play along but then stomp and start to wonder why his fellow actors are doing this. I think each of the characters reactions would give the audience an insight towards each of the characters personalities. Shorlagh Mc Conville S1C, Mrs Curley, Drama. ...read more.