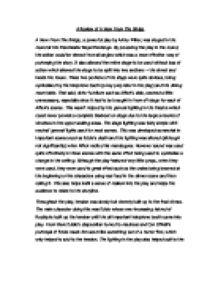 A View From The Bridge, a powerful play by Arthur Miller, was staged in the round at the Manchester Royal Exchange.

A Review of A View From The Bridge

A View From The Bridge, a powerful play by Arthur Miller, was staged in the round at the Manchester Royal Exchange. By producing the play in the round, the action could be viewed from all angles which was a more effective way of portraying the story. It also allowed the entire stage to be used without loss of action which allowed the stage to be split into two sections – the street and inside the house. These two portions of the stage were quite obvious, being symbolised by the telephone booth (a key prop later in the play) and the dining room table. That said, other furniture such as Alfieri’s desk, seemed a little unnecessary, especially since it had to be brought in from off stage for each of Alfieri’s scenes. This wasn’t helped by the general lighting in the theatre which could never provide a complete blackout on stage due to the large amounts of windows in the upper seating areas. The stage lighting was fairly simple with neutral ‘general’ lights used for most scenes. This was developed somewhat in important scenes such as Eddie’s death and the lighting was altered (although not significantly) when Alfieri recited his monologues. However sound was used quite effectively in these scenes with the same effect being used to symbolise a change in the setting. Although the play featured very little props, when they were used, they were used to great effect such as the crates being lowered at the beginning or the characters using real food in the dinner scene and then eating it. This also helps instil a sense of realism into the play and helps the audience to relate to the storyline.

Throughout the play, tension was slowly but cleverly built up to the final climax. The main character doing this was Eddie whose ever increasing hatred of Rodolpho built up the tension until the all important telephone booth came into play. From there Eddie’s desperation turned to madness and Con O’Neill’s portrayal of Eddie made him seem like something out of a horror film, which only helped to add to the tension. The lighting in the play also helped add to the tension with more menacing and ominous lights used as the play progressed through the second act.

All of the characters where depicted beautifully in the play thanks to wonderful acting paired with realistic costumes, which made this play a real delight to watch. The costumes worn by the characters were simple but effective, accurately representing the style of 1940s New York. The costumes also helped contrast the personalities between Eddie and Rodolpho with Eddie’s typical ‘working man’ clothes and Rodolpho in his smart shirts and stylish shoes. The acting was let down somewhat by the voice acting of Catherine (Leila Mimmack) whose accent seem to be very variable, ranging from broad New York to almost full-on Italian. The voices of everyone in else in the play however were superb and really helped to make the play more realistic and believable. In particular Ian Redford did a sterling job, brilliantly portraying Alfieri’s helplessness and narrating the story with exactly the right tone.

A moment that really stood out for me was the very last scene in which Eddie is trying to get Marco to give him back his respect. Con O’Neill portrays Eddie’s desperation magnificently and uses every part of his body to make him seem crazy, especially his facial features. The same could also be said about Nitzan Sharron’s character Marco who is so furious with Eddies, he is practically on fire. This scene is a really shocking point in the storyline which was wonderfully acted by all since the scene featured nearly all the cast. The scene was let down somewhat by the over exaggerated and unrealistic death of Eddie Carbone. Even though producing a realistic death scene is hard to do in any play, the way Eddie was stabbed and O’Neill’s acting on his death was a bit disappointing. However this may be due to the fact that the play was performed in the round and so not everyone can experience the death as it was intended. The scene was well rounded off by Alfieri who delivered his consistently good speech which helped end the scene, and the play, extremely well.