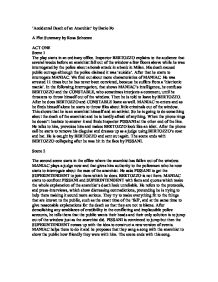 'Accidental Death of an Anarchist' by Dario Fo - A Plot Summary

'Accidental Death of an Anarchist' by Dario Fo A Plot Summary by Rosa Scheewe ACT ONE Scene 1 The play starts in an ordinary office. Inspector BERTOZZO explains to the audience that several weeks before an anarchist fell out of the window a few floors above while he was interrogated by the police about a bomb attack in a bank in Milan. His death caused public outrage although the police claimed it was 'suicide'. After that he starts to interrogate MANIAC. We find out about more characteristics of MANIAC. He was arrested 11 times but he has never been convicted, because he suffers from a 'histrionic mania'. In the following interrogation, that shows MANIAC's intelligence, he confuses BERTOZZO and the CONSTABLE, who sometimes interjects a comment, until he threatens to throw himself out of the window. Then he is told to leave by BERTOZZO. After he does BERTOZZO and CONSTABLE leave as well. MANIAC re-enters and as he finds himself alone he starts to throw files about little criminals out of the window. ...read more.

PISSANI is convinced to jump but then the SUPERINTENDENT comes up with the idea to construct a new version of events. MANIAC helps them to do it and he proposes that they sang a song with the anarchist to show the public how friendly they were with him. The scene ends with this song. ACT TWO Scene 1 It starts with PISSANI, MANIAC and SUPERINTENDENT singing the same song. MANIAC carries on provoking and fooling them to the point where the SUPERINTENDENT in a rush of anger and confusion finally seems to admit that he did push the anarchist out of the window. At that moment a phone call tells them that there is a journalist waiting downstairs to interview SUPERINTENDENT about the anarchist-case. MANIAC offers to play the role of CAPTAIN MARCANTONIO BANZI PICCINI to help the policemen in case the journalist would ask tricky questions. He dresses up in a gaudy disguise with false hand and leg, an eye patch and a wild wig, which makes the police look ridiculous for the journalist. ...read more.

This stylistic devise is used to get the audience more involved. The other actors break from the script as well but as soon as they do they are actors whereas MANIAC still remains MANIAC even during the breaking. After all he finds his way back and reveals that he has taped everything since he first was in this room. FELETTI then recognizes him as a famous sports journalist; this has the effect that MANIAC becomes normal, while everything is abnormal. He says he will send this tape everywhere and suddenly presents a detonator to the bomb. He hands the keys of the handcuffs to FELETTI and leaves them all with the bomb, 30 seconds and her to decide: either to 'release them, write your story, but the evidence will die with me (MANIAC) and the bunch will undoubtedly be acquitted. Don't release them and you become my accomplice' FELETTI decides to escape. But there are actually 2 ends to the story: FELETTI releases them but is handcuffed again to the window frame by the policemen. However, MANIAC always has the last word. ...read more.