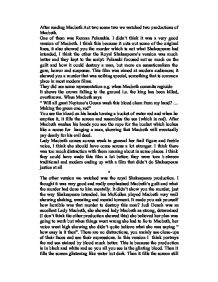 After reading Macbeth Act two scene two we watched two productions of Macbeth. One of them was Roman Polanskis. I didn't think it was a very good version of Macbeth. I think this because it cuts out some of the original lines, it also showed you the murder which is not what Shakespeare had intended, I think the other the Royal Shakespeare's version was much better and they kept to the script. Polanski focused not so much on the guilt and how it could destroy a man, but more on sensationalism the gore, horror and suspense. This film was aimed at modern audiences; it showed you a murder that was nothing special, something that is common place in most modern films. ...read more.

Lady Macbeth comes across weak in general her frail figure and feeble voice, I think she should have come across a lot stronger. I think there was too much distraction with them running about in some places. I think they could have made this film a lot better; they were torn between traditional and modern ending up with a film that didn't do Shakespeare justice at all * The other version we watched was the royal Shakespeare production. I thought it was very good and really emphasised Macbeth's guilt and what the murder had done to him mentally. It didn't show you the murder, just the way Shakespeare intended. Ian McKellen played Macbeth very well showing shaking, sweating and mental torment. ...read more.

There are no distractions, you mainly see close-ups of their faces and see their expressions. In this version I think portrays the red sea stained by blood much better. This is because the production is in black and white and so you all you see is the glinting blood. Then it fills the screen glistening like water but dark. Then it fills the screen still glinting, moving, swelling up and down like the sea, but its still on Macbeth's hands! This shows that Macbeth is so lost in thought he is imagining a sea of blood. Whereas in the other production, Macbeth just talked about the sea of blood. I thought this version was much better as it really made a big impact, showing how murder is not easy and the impact it had on Macbeth was disturbing to see this quivering wreck who was obsessed by the murder. ...read more.