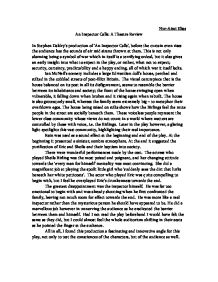 An Inspector Calls: A Theatre Review.

Nur-Aimi Elias An Inspector Calls: A Theatre Review In Stephen Daldry's production of 'An Inspector Calls', before the curtain even rises the audience has the sounds of air raid sirens thrown at them. This is not only alarming being a symbol of war which in itself is a terrifying ordeal, but it also gives an early insight into what to expect in the play, or rather, what not to expect; security, certainty, predictability and a happy ending, all of which war it itself lacks. Ian McNeil's scenery includes a large Edwardian doll's house, perched and stilted in the cobbled streets of post-Blitz Britain. ...read more.

These voiceless people represent the lower class community whose views do not count in a world where matters are controlled by those with voice, i.e. the Birlings. Later in the play however, a glaring light spotlights this vast community, highlighting their real importance. Rain was used as a sound effect at the beginning and end of the play. At the beginning it presented a sinister, sombre atmosphere. At the end it suggested the purification of Eric and Sheila and their baptism into society. There were wonderful performances made by the cast. The actress who played Sheila Birling was the most poised and poignant, and her changing attitude towards the 'every man for himself' mentality was most convincing. ...read more.

He was far too emotional to begin with and was already shouting when he first confronted the family, leaving not much room for effect towards the end. He was more like a real inspector rather than the mysterious person he should have appeared to be. He did a marvellous job however in unnerving the audience as he eradicated the barrier between them and himself. Had I not read the play beforehand I would have felt the same as they did, but I could almost feel the whole auditorium shifting in their seats as he pointed the finger at the audience. All in all, I found this production a fascinating and innovative angle for this play, not only to test the consciences of the characters, but of the audience as well. ...read more.