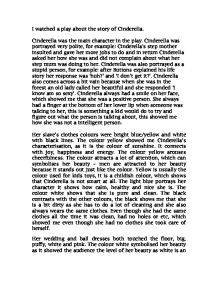 Cinderella. The lighting on Cinderella was the same in all scenes. It was natural, a yellowish white colour and bright.

I watched a play about the story of Cinderella. Cinderella was the main character in the play. Cinderella was portrayed very polite, for example: Cinderella's step mother insulted and gave her more jobs to do and in return Cinderella asked her how she was and did not complain about what her step mum was doing to her. Cinderella was also portrayed as a stupid person, for example: after Buttons explained his life story her response was 'huh?' and 'I don't get it?'. Cinderella also comes across a bit vain because when she was in the forest an old lady called her beautiful and she responded 'I know am so sexy'. Cinderella always had a smile on her face, which showed me that she was a positive person. She always had a finger at the bottom of her lower lip when someone was talking to her, this is something a kid would do to try and figure out what the person is talking about, this showed me how she was not a intelligent person. Her slave's clothes colours were bright blue/yellow and white with black lines. The colour yellow showed me Cinderella's characterisation, as it is the colour of sunshine. It connects with joy, happiness and energy. The colour yellow arouses cheerfulness. The colour attracts a lot of attention, which can symbolises her beauty - men are attracted to her beauty because it stands out just like the colour. ...read more.

The evil twin sisters were very different in height. Lucretia was very tall while Griselda was very small which showed the audience the difference between the two as they argued about their height difference a lot. The twins wear colourful clothes. The main colours are dark green which symbolises their wealth it shows that they are rich people, dull yellow which showed me how jealous they were of Cinderella as all their clothes had that colour, pink which shows how girly they are, dark blue which symbolises the power they have over Cinderella, orange and red symbolise that they want to take over Cinderella's life. Their outfits are always colourful like a rainbow. The lighting for the twins was a dramatic, purple - pink colour which connected very well with their actions as pink and purple are s****l desired colours, they did a lot of s****l movements, for example: they purposely moved their b*****s forward or squeezed one of the prince b*m. The prince charming was a very weak character for me as he was not as believable, funny or dramatic as the other characters, but he had a strong rich accent, which made him sound and look like royalty, for example: 'Pardon me may you excuse your hands from my b******s', the word pardon and excuse made him sound old fashion which is how I think royal people would speak. He stood up straight, hands behind his back, head high and chest up, which showed how powerful he was (not physically powerful). ...read more.

The most memorable moment was when the stepsisters and mother found out Cinderella went to the ball and was the girl the prince danced with. The lighting immediately changed to a dark, brown and black colour and a scary sound/music was put on, everything turned from comedy to scary and serious. The characters all had serious faces. It was realistic as Cinderella was shaken, had a scared face and was walking back while the twins and the mum had angry faces and an evil smile on their faces and was walking towards her. The lights were turned off and a high pitch and loud scream was made. The contrast between the scenes took me off guard, as it was all comedy and unrealistic and then it turned serious, it shocked me, as I was not expecting it. The form was abstract, musical and comedy as in one scene Cinderella had to pick up branches in the forest, she met the prince, they had a little conversation and she started singing a whole new world, then the prince said 'Oi wrong song' 'huh oh d*m I seriously do not still the difference between this fairy tales'. It was a romantic moment, which they turned into comedy it was also abstract as in real life this would not happen. They started singing a song about their feelings while walking towards each other, which was very funny as they were swearing because they did not know why they both felt so hot. ...read more.