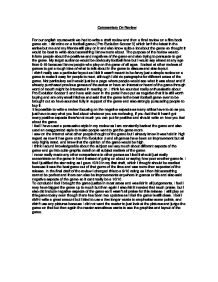 Commentary On Review For our english coursework we had to write a draft review and then a final review on a film book game etc. I did mine on a football game ( Pro Evolution Soccer 3) which isn't the latest in the series but me and my friends still play on it and also know quite a lot about the game so thought it would be best to write about something i knew more about. The purpose of the review was to inform people about the positives and negatives of the game and also trying to persuade to get the game. My target audience would be obviously football fans but i would say aimed at any age from 9-19 because i know people who play on the game of all ages. ...read more.

It is possible to write a review focusing on the negative aspects as many critics have to do as you just have to say what you feel about whatever you are reviewing, if you feel that it hasn't got many positive aspects there's not much you can put for positive and should write on how you feel about the game. I feel i have used a persuasive style in my review as i am constantly backed the game and also used an exaggerated style to make people want to get the game more. I saw on the internet what other people thought of the game but i already knew it was held in high regard as now it has gone onto Pro Evolution 5 and all games have been an improvement but all very highly rated, and knew that the opinion of the game would be high. ...read more.

To conclude i feel i brought the game justice in most areas and was fair in all judgements, I feel i may have bigged the game up to much but then again i also felt it needed that much praise, but i also did include negative aspects of the game so it wasn't all praise for this release. I still play on this game today even though there has been two updates as i feel the game is still class. I feel i did'nt write a great amount but i tried to use a few longer words to emphasise some points, and didn't use any pictures because I did not want the reader to just look at the pictures and judge the game on that but then again the reader sometimes wants to see the graphics and layout of the game. ...read more.