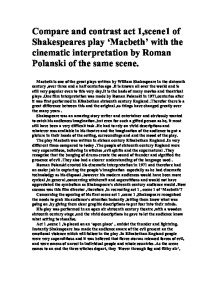 Compare and contrast act 1,scene1 of Shakespeares play 'Macbeth' with the cinematic interpretation by Roman Polanski of the same scene.

Compare and contrast act 1,scene1 of Shakespeares play 'Macbeth' with the cinematic interpretation by Roman Polanski of the same scene. Macbeth is one of the great plays written by William Shakespeare in the sixteenth century ,over three and a half centuries ago .It is known all over the world and is still very popular even to this very day.It is the basis of many movies and theatrical plays .One film interpretation was made by Roman Polanski in 1971,centuries after it was first performed in Elizabethan sixteenth century England .Therefor there is a great difference between this and the original ,as things have changed greatly over the many years . Shakespeare was an amazing story writer and entertainer and obviously wanted to catch his audiences imagination ,but even for such a gifted person as he, it must still have been a very difficult task .He had to rely on vivid descriptions and whatever was available in his theatre and the imagination of the audience to put a picture in their heads of the setting, surroundings and and the mood of the play. The play Macbeth was written in sixteen century Elizabethan England .In very different times compared to today .The people of sixteenth century England were very superstitious, believing in witches ,evil spirits and the supernatural .They recognise that the banging of drums create the sound of thunder and signified the presence of evil .They also had a clearer understanding of the language used . ...read more.

As the witches leave, the eerie music returns .Polanski has effectively reflected the eeriness of Shakespeare's scene. When Shakespeare was writing ,most people believed in witches ,and recognised them as the devil's minions who only caused evil .Shakespeare therefore had little need to do more than present these creatures conventionally .Their language alone would have alerted the audience to their evil purpose and their capacity for supernatural powers . 'Fair is foul ,and foul is fair'. 'I come Grey malkin'. 'Paddock calls'. 'That will be ere the set of sun'. These lines alone simply ,and effectively reinforce for his audience that evil was present. Polanski, however, had to work harder to convince his audience of the witches' evil powers .The three witches enter to silence on a deserted, barren shoreline. They are hideous creatures ,their appearance is shocking and repellent ,defects all over there skin. The third witch enters first and digs a hole in the wet sand as if her life depended on it .The three witches were of three different ages ,showing witchcraft is present across the generations for one is deaf ,one is dumb ,and one is blind .They work together ,and need each other to survive ,and they do so well .They all look harmless ,but are capable of evil deeds using their supernatural powers and consequently have a deceptive nature ,belying their appearance .They all speak with a similar accent ,but each seems to have its own personality .They do not have familiars with them and do not cackle or laugh .Polanski did well in effectively showing the witches to a modern audience and portraying the evil present. ...read more.

Although Polanski has taken liberties with Shakespeare's text ,he did so to catch the atmosphere ,mood and the main themes of the original and therefore reflects Shakespeare's themes in his movie interpretation. I have greatly enjoyed both the original and Roman Polanski's version , both were very good each magnificent in its own way however, I personally favoured Polanski's over the original as he had access to all modern movie making equipment ,which in this day and age is very important .The original was a masterpiece which I very much enjoyed ,and this is the reason why it has been so popular and so many movie adaptations have been made over the three and a half centuries since it was written .It would be very hard and unfair to compare the two ,for if it had not been for shakespeare writing his original centuries ago Polanski would have nothing to work on .Polanski had to rely on Shakespeare who wrote the great play . Thanks to Shakespeare ,Polanski was able to do his movie interpretation .He retained the essence that Shakespeare wanted and he had , 'A healthy respect for the language'. Both great works created visual drama ,Polanski has done an excellent job as he has achieved the same gripping effect on his twentieth century audience as Shakespeare did in the sixteenth century .Polanski is a very talented director who has in his adaptation of Shakespeare's scene created an intimidating atmosphere, arousing his audience's curiosity and pulling them into the disordered world of 'Macbeth'! ...read more.