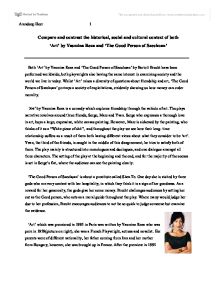 Compare and contrast the historical, social and cultural context of both

Compare and contrast the historical, social and cultural context of both 'Art' by Yasmina Reza and 'The Good Person of Szechuan' Both 'Art' by Yasmina Reza and 'The Good Person of Szechuan' by Bertolt Brecht have been performed worldwide, both playwrights also having the same interest in examining society and the world we live in today. Whilst 'Art' raises a diversity of questions about friendship and art, 'The Good Person of Szechuan' portrays a society of exploitations, evidently showing us how money can order morality. 'Art' by Yasmina Reza is a comedy which explores friendship through the vehicle of art. The plays narrative revolves around three friends, Serge, Marc and Yvan. Serge who expresses a thorough love in art, buys a large, expensive, white canvas painting. However, Marc is sickened by the painting, who thinks of it as a "White piece of s**t", and throughout the play we see how their long- time relationship suffers as a result of them both having different views about what they consider to be 'art'. Yvan, the third of the friends, is caught in the middle of this disagreement; he tries to satisfy both of them. ...read more.

The play was written between 1939 and 1941; however, the play wasn't completed until 1943 whilst he was living in exile in the USA. The play during the time was an example of epic theatre, and was not written to the assumptions of the realistic theatre. Brecht is considered by many to have had the greatest influence upon post modern drama. Throughout his life he revolutionised drama so that it could be used as a vehicle to examine the society in which he lived. Being a Marxist, he was concerned with the Marx's philosophy, based on power and how they treat those beneath them. Although, overall what Bertolt conveyed really well through life in the majority of all his works is inventing the expectation of the character by not giving the stereotypical character. In 'The Good Person of Szechuan', according to Brecht, he examined how society functioned with the central character scrutinised who finds it would be impossible to give without also taking. Historically, both writers had a reason for writing such plays. Yasmina Reza wrote her play as a vehicle to examine the current debate at the time with reference to what is art with close reference to the examination of friendship in our rapidly increasing modern society; whereas, Bertolt Brecht was using the vehicle of theatre to examine social injustice in society. ...read more.

In 'The Good women of Szechuan', it is written to illustrate how money is the root from all evil, showing that the proletariat people were working class good people, compared to the bourgeoisie who were upper class corrupt people. The picture on the right is from the performance of 'The Good Person of Szechuan' which was seen in September 2007. The picture is a prime example of how Bertolt Brecht used only the most significant features on a costume. The performers would all be wearing a plain colour in which they added one or two key features to make them look like the specific character. The picture also illustrates how, electronic presentations are used to convey visual presentations, placards, and what they really used it for was to communicate the message to the audience. In conclusion, there were many differences in historical, cultural and social context; however, there weren't many similarities. Personally, one of the biggest factors which made the plays so different was the difference in playwright. Both playwrights had a dissimilar stylistic interpretation of the plays, which made them so diverse to one another. The fact that Reza's play was largely realistic and naturalistic compared to Bertolt who used a range of techniques to break the illusion of realism. Arandeep Heer 1 ...read more.