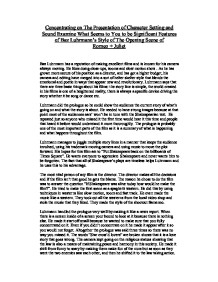 Concentrating on The Presentation of Character Setting and Sound Examine What Seems to You to be Significant Features of Baz Luhrmann's Style of The Opening Scene of Romeo + Juliet Baz Luhrmann has a reputation of making excellent films and is known for his camera always moving. He likes doing close-ups, zooms and slow motion shots . As he has grown more secure of his position as a director, and has got a higher budget, his camera and editing have merged into a sort of helter skelter style that blends the emotional and poetic in ways that appear new and revolutionary. Luhrmann says that there are three basic things about his films: the story line is simple, the world created in his films is one of a heightened reality, there is always a specific device driving the story whether it be song or dance etc. Luhrmann did the prologue so he could show the audience the current story of what's going on and what the story is about. He needed to have strong images because at that point most of the audiences ears' won't be in tune with the Shakespearian text. He repeated just so anyone who missed it the first time would hear it this time and people that heard it before would understand it more thouroughly. The prologue is probably one of the most important parts of the film as it is a summary of what is happening and what happens throughout the film. ...read more.

He made it at a petrol station because he thought what would rich, young boys do with their time? And then he thought that they would ride around in cars biting their thumb at each other. Also a petrol station is a place that everyone goes, every day to fill up their cars. In that way it is like the town centre because everyone passes by. He made this a first scene to introduce you to everyone and it is an exciting scene, which makes sure you won't want to walk out. The production designer has to choose where they were going to set the film. At first they thought of filming it in Miami because they need generic landscape, one that no one recognises, and everyone there was Latino and hot blooded. The reason they didn't film there was because they were not allowed. They went around the world looking for a new place which had what they wanted and found Mexico. They thought it was such a great place because it already had religious statues about the place and everyone was Latino. It represented Verona very well. The production designer also needs to focus on the small details because they all tell a story about the person for example, if someone has a button missing it may show they have been in a fight, or are not very well off or even don't treat there things well. ...read more.

An example of this is Tybalt. You can tell he is evil by the way he dresses. Also you can tell he is religious because he has a vest with Jesus on it. The choreographer is the person in charge of the movements the cast make. This is important because the movements the actors make give the style of themselves. This style embellishes the character and tells you about what the person is like. The Montague's move in a way that makes them out to be laid back and not really bothered about things, just want to enjoy life. The Capulet's move in a way showing that they are serious and want to be above the Montague's. The sound is a major part in any film and is a long, hard job. In one shot there is more than one sound. There is the background music, footsteps, maybe the sound of cars, gunshots etc. As they tried to make it as a spaghetti western they did things like using the sound of spurs when Tybalt gets out of the car. Luhrmann has answered his question about "How would Shakespeare make this film if he was alive today?" He has made this achievement because the only reason Shakespeare made the play in that way was because that was what things were like those days. If he was alive today he probably would have made it in the way Baz Luhrmann has. Zaffarelli made his version the same as Shakespeare's but if Shakespeare was alive today he would have updated it using a modern cityscape. By Gibran Awan ...read more.