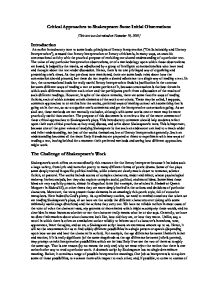 Critical Approaches to Shakespeare: Some Initial Observations [This text was last revised on November 19, 2001] Introduction An earlier introductory note to some basic principles of literary interpretation ("On Scholarship and Literary Interpretation"), stressed that literary interpretation or literary criticism is, in many ways, an anarchic conversational activity with the practical purpose of enriching our shared understanding of a particular text. The value of any particular interpretative observations, or of a methodology upon which those observations are based, is judged by the results, as adjudicated by a group of intelligent conversationalists who have read and thought about the text under discussion. Hence, there is no one privileged way of organizing and presenting one's views. As that previous note mentioned, there are some basic rules about how the conversation should proceed, but these do not require a shared adherence to a single way of reading a text. In fact, the conversational basis for really useful literary interpretation finds its justification in the contrast between different ways of reading a text or some portion of it, because conversation is the best forum in which such differences confront each other and the participants profit from a discussion of the results of such different readings. However, in spite of the above remarks, there are some favorite ways of reading fictions, each of which stresses certain elements of the work over others. These may be called, I suppose, common approaches to or entries into the works, preferred ways of making contact with something that is going on in the text, so as to organize one's comments and get the interpretative conversation going. As we shall see, these methods are not mutually exclusive, although with some works one or more may be more practically useful than another. The purpose of this document is to review a few of the more common of these critical approaches to Shakespeare's plays. This introductory comment should help students reflect upon their own critical practices as they read, discuss, and write about Shakespeare's texts. ...read more.

Is The Tempest really an exploration of colonialist attitudes? That's an interesting idea. How does a close reading of the play, together with a careful examination of the characters' actions, confirm or repudiate that suggestion? Is the first History Cycle calling attention to the marginalization of women from the political process? Or does the dramatic effect of these particular female characters challenge that idea? Reading a number of Shakespeare's plays encourages this often fertile union of character analysis and thematic interpretation, because he is fond of returning to dramatic conflicts between pairs of opposite types: the valiant warrior (Othello, Hotspur, Antony) pitted against the devious manipulative schemer (Iago, Henry IV, Octavius); the expressive poet-prince (Richard II, Hamlet) pitted against the shrewd political pragmatist (Bolingbroke, Claudius); the intelligent, loving young woman (Rosalind, Viola) having to deal with the sentimental, poetical bachelor (Orlando, Orsino), and so on. These conflicts may present uniquely drawn characters in action, but there are recurring thematic issues which help to coordinate all of Shakespeare's work until it starts to become, for the avid reader, one long work, ceaselessly exploring major issues through the experiences of unforgettable characters. The Approach Through Poetic Symbol Another common approach to a particular play focuses on the imagery, either on some obviously important symbol which recurs throughout the work or to some image pattern. Such poetic components in the language obviously can contribute in a major way to our understanding of what is going on. In some sense, of course, because we are dealing with poetic drama and have only the language to examine, interpreting both character and theme will often require detailed attention to particular patterns of imagery, symbol, and other significant language. For example, however we assess the character of Hamlet, it is difficult to miss how much of his language, especially in his soliloquies, is infused with images of death, sickness, and corrupt sexuality, so much so that the patterns in the imagery invite us see in them a pattern in the personality or an indication of a major thematic concern of the play, the sickness in Elsinore, or both. ...read more.

Irony can be a slippery business, because once we sense it is present, we know we are on difficult ground. How deep do the ironies penetrate? Is there any firm ground on which we can rest an interpretation? And in some writers, where ironies seem to be present everywhere (e.g., Montaigne), we can often find ourselves losing confidence in the possibility of any firmly shared meaning. One of the great problems with Hamlet may well stem from this point: all energizing senses of goodness and sympathy seem to be qualified so strongly and persistently with ironic counterweights, that at the end we are not sure how to sum up what we have experienced. It is difficult, for example, in this play not to feel some sympathy for almost every character and yet, at the same time, to judge each character as significantly deficient in some way or another. Interpreting Shakespeare requires us to be alert to the possibility of such ironic complication and to the ways it can affect our understanding of the play. In fact, many of our discussions will focus squarely on that issue. Is this speech or this action to be understood literally? Does the character mean what he says? How is this action or speech qualified, or undercut, or contradicted by other elements in the scene or in the play? How does the presence of irony (in varying degrees) affect our response to the play? Shakespeare's plays and poems offer a fertile ground for the consideration of these questions, since they range from works that seem unambiguously affirming (like, perhaps, As You Like It, and many of the sonnets) to others which offer limited ironic possibilities (like, say, Twelfth Night), all the way to the other end of the spectrum where some works are so pervasively ironic that we have the greatest difficulty deciding finally what they might be claiming, if anything, about experience (like, for example, Hamlet, All's Well That's Ends Well, Troilus and Cressida, or Sonnet 94). ...read more.