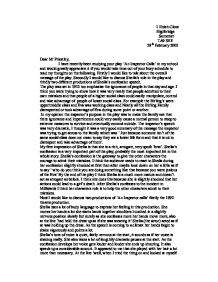 1 Huish Close Highbridge Somerset TA9 3HF 28th February 2002 Dear Mr Priestley, I have recently been studying your play 'An Inspector Calls' in my school and would greatly appreciate it if you would take time out of your busy schedule to read my thoughts on the following. Firstly I would like to talk about the overall message of the play. Secondly I would like to discuss Sheila's role in the play and thirdly two different productions of Sheila's confession speech. The play was set in 1912 too emphasise the ignorance of people in that day and age. I think you were trying to show how it was very rarely that people admitted to their own mistakes and that people of a higher social class could easily manipulate, control and take advantage of people of lower social class. For example the Birling's were upper/middle class and Eva was working class and Nearly all the Birling Family disrespected or took advantage of Eva during some point or another. ...read more.

Shelia uses a lot of body language to express her feeling in this production. She moves her hands a lot she starts hands together shoulders hunched in a slightly nervous position slowly but surely as she confesses more her hands move more, also at the line 'had held the dress up as if she was wearing it' Shelia (the actor) acted as if se was holding up the dress. As the speech is coming to a climax her hands begin to shake vigorously and points a lot. Shelia's tone of voice is quiet, fairly nervous at the start, it sounds as if her voice is shaking really. She also takes a lot of lengthily dramatic pauses at the start. As the confession develops her voice gets louder and louder she ends up shouting. It also speeds up a considerable amount. It appeared to me that she played with her hair a lot more than necessary. At the line 'well, when I tried the thing on and looked at myself and realise it was all wrong' is said slightly curiously, I think. ...read more.

There a lot of dramatic devises used in this production even more than in the theatre production. The first one is that Shelia is shown in a mirror not actually in the picture. The second is the flashback that re-enacts the scene in Millwards when Sheila accuses Eva of being impertinent and reports her to the manager. There is also dramatic music at the end of the re-enactment. There was one flaw in this production, which was that Shelia said she was trying on a hat and not a dress so they didn't really stay true to the story. You also can't here the audience (because it is a film) so I can't comment on the audience reaction. In conclusion to this I think that the 1992 theatre production gives most credit to Shelia's role judging from the original script. I think that the theatre production has a much deeper effect on the audience. It gives across your message much, much better, so I would have to say that I feel the theatre production is a much more effective production. Yours Sincerely Jason Lister ...read more.