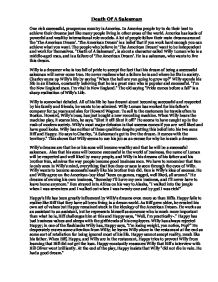 Death Of A Salesman.

Death Of A Salesman One rich successful, prosperous country is America. In America people try to do their best to achieve their dreams just like many people living in other areas of the world. America has loads of powerful and wealthy international role models. A lot of people follow their main dreams around the 'The American Dream'. 'The American Dream' is a belief that if you work hard enough you can achieve what you want. The people who believe in 'The American Dream' want to be independent and work for themselves. "Death of A Salesman", is about a character called Willy Loman who is a middle-aged man, and is a failure of 'The American Dream'. He is a salesman, who wants to live this dream. Willy is a dreamer who is too full of pride to accept the fact that his dream of being a successful salesman will never come true. He never realizes what a failure he is and where he fits in society. Charley sums up Willy's life by saying "When the hell are you going to grow up?" Willy spends his life in an illusion, constantly believing that he is a great man who is popular and successful. ...read more.

He desperately craves some attention from Willy; he leaves Willy alone in the restaurant at the end as some sort of retaliation for being ignored most of his life. Happy cannot accept reality, much like his father. When Biff, Happy, and Willy are in the restaurant, Happy tries to prevent Willy from learning that Biff did not get the loan. Happy constantly reassures Willy that Biffs interview with Bill Oliver went brilliantly. At the end of the play, Happy insists that Willy "did not die in vain. He had a good dream." Biff Loman is the result of his fathers' dreams and admiration, in many ways is similar to his father. Willy's dreams have a negative influence on Biff and Happy throughout their lives. At the beginning of the play, Biff shares many of the same ideas as Willy. He values being well liked and sees little point in being honest. In fact, he is another failure of the American dream; he thinks he is well liked when in reality he is not, the watchman on the building site, Bill Oliver and the parents of the neighbourhood girls. Biff steals many things throughout his life. ...read more.

He never understood this he was living in pursuit of the dream and not the dream. He did not understand that being a salesman is based on lies and deceit you are selling the vital dream. He could not achieve an honest dream by selling lies. His family becomes dysfunctional. Willy seems to love his wife apart from the problem he has of cutting her off in mid sentence and is a typical male chauvinist. Happy is much more like his father than anyone else, he evades reality by living in a fantasy world. Biff begins to hate his father because of the constant pressure to achieve and succeed, he hates his fathers' adultery and the way he treats his mother. Linda is annoyed with Happy and Biff because they do not respect Willy and his dreams. Biff deep down really still does care for Willy, however Biff is also a failure in Willy's eyes because he has not lived the dream The play has a tragic ending of Willy still wanting his family to live his dream and his family still has to deal with the grief that Willy could not accept who he was and who they are. Willy kills himself, hoping that the insurance money will help his family on their way to success, but instead the insurance money from his death will help no one. ...read more.