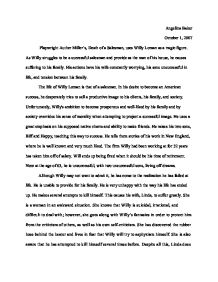 Angelina Baker October 1, 2007 Playwright Auther Miller's, Death of a Salesman, uses Willy Loman as a tragic figure. As Willy struggles to be a successful salesman and provide as the man of his house, he causes suffering to his family. His actions have his wife constantly worrying, his sons unsuccessful in life, and tension between his family. The life of Willy Loman is that of a salesman. In his desire to become an American success, he desperately tries to sell a productive image to his clients, his family, and society. Unfortunately, Willy's ambition to become prosperous and well-liked by his family and by society overrides his sense of morality when attempting to project a successful image. He uses a great emphasis on his supposed native charm and ability to make friends. He raises his two sons, Biff and Happy, teaching this way to success. He tells them stories of his work in New England, where he is well known and very much liked. ...read more.

She has a lot of faith that Willy can accomplish this. She has lived with Willy most of her life, and would not know what to do without him. She lives in fear and desperation While on a business trip in Boston, Willy has an affair with another woman. Biff discovers them and his faith in his dad is broken. This event sent Biffs' life in a downward spiral. The goals he has set for himself were shattered now. Biff looked up to his father, believing that he could become successful just like his dad. After realizing that his life was based on lies within his family, he lost his yearn to go forth and prosper. He is now a grown man, with nothing to show for. He has no job and is living back at home with his parents. He has gone from job to job, failing at each one. He thinks of himself as a bum and has no will power to go forward in life. Even after his dad has built him up to be a boy who could be great. ...read more.

Happy is also unsuccessful, living an unhappy life. He is trying to pleas his dad, when really his dad is just causing him to suffer. As a tragic hero, Willy is both the bane yet the central axis of his family with whom he is unable to connect and form significant relationships. His delusions lead too much of the tragic perception of him as it appears only Willy is unable to see how unrealistic his perceptions of life and success really are. He is an unwillingness to submit passively to the established order and values. He even commits suicide in his last attempt to provide money which all ends to Biff's success. His result of an individual's quest for personal dignity occurs when an individual attempts to evaluate existence justly. He again becomes a tragic hero as his downfall does not live up to his original delusions but instead favors his family with "freedom". This is something they all wished for while he was alive. In Willy's descent, there is a tragic paradox; for as he moves towards inevitable destruction, he acquires that knowledge, that sense of reconciliation, which allows him to conceive a redemptive plan for his house. ...read more.