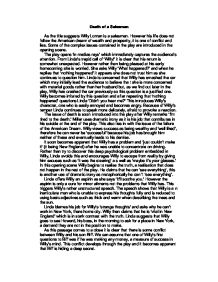 Death of a Salesman.

Death of a Salesman As the title suggests Willy Loman is a salesman. However his life does not follow the American dream of wealth and prosperity, it is one of conflict and lies. Some of the complex issues contained in the play are introduced in the opening scene. The play opens 'in medias reys' which immediately captures the audience's attention. From Linda's trepid call of 'Willy!' it is clear that his return is somewhat unexpected. However rather than being pleased at his early homecoming she is worried. She asks Willy 'What happened?' and when he replies that 'nothing happened' it appears she does not trust him as she continues to question him. Linda is concerned that Willy has smashed the car which may initially lead the audience to believe that she is more concerned with material goods rather than ...read more.

Miller uses dramatic irony as it is his job that contributes in his suicide at the end of the play. This also ties in with the issue of the failure of the American Dream. Willy views success as being wealthy and 'well liked', therefore he can never be 'successful' because his job has brought him neither of these and eventually leads to his demise. It soon becomes apparent that Willy has a problem and 'just couldn't make it' (it being New England) after he was unable to concentrate on driving. Rather than try to discover this deep psychological problem embedded in Willy, Linda avoids this and encourages Willy to escape from reality by giving him excuses such as 'it was the steering' as well as 'maybe it's your glasses.' ...read more.

Linda blames his job for Willy's 'strange thoughts' and asks why he can't work in New York, there home city. Willy then claims that he is 'vital in New England' which is in stark contrast with the truth. Linda suggests that Willy goes to see Howard, his boss, in the morning to ask for a place in New York, a demand they are not in the position to make. As this passage comes to a close it is clear that there is some conflict between Willy and his son Biff. We can assume that one of Willy's first questions to Biff was if he was making any money, a measure of success in Willy's mind. This conflict develops through the play and it becomes apparent that Biff is hiding a deep secret. ...read more.