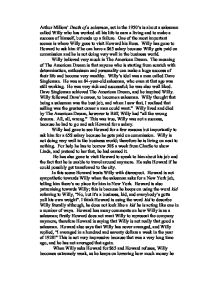 Death of a Salesman - review.

Arthur Millers' Death of a salesman, set in the 1950's is about a salesman called Willy who has worked all his life to earn a living and to make a success of himself, but ends up a failure. One of the most important scenes is where Willy goes to visit Howard his Boss. Willy has gone to Howard to ask him if he can have a $65 salary because Willy gets paid on commission and he is not doing very well in the business world. Willy believed very much in The American Dream. The meaning of The American Dream is that anyone who is starting from scratch with determination, enthusiasm and personality can make a huge success of their life and become very wealthy. Willy's idol was a man called Dave Singleman. He was an 84-year-old salesman, who even at that age was still working. He was very rich and successful; he was also well liked. Dave Singleman achieved The American Dream, and he inspired Willy. Willy followed Dave's career, to become a salesman. Willy thought that being a salesman was the best job, and when I saw that, I realised that selling was the greatest career a man could want." Willy lived and died by The American Dream, however to Biff, Willy had "all the wrong dreams. ...read more.

Willy explains his green slipper illusion by telling Howard the reason he became a salesman in the first place: he thought that he would die the death of a salesman, namely that he would die after living a life of luxury, having been a famous, loved and respected salesman who didn't even have to leave his hotel room to make his deals. Willy elaborates on the business world he knew as an eager, young salesman, lamenting to Howard, "There was respect, and comradeship, and gratitude in it. Today, it's all cut and dried, and there's no chance for bringing friendship to bear-or personality." Here, it's obvious that Willy no longer has a place in the commercial marketplace. Willy soon grows angry, telling Howard, "You can't eat the orange and throw the peel away-a man is not a piece of fruit." Here, Willy feels that Howard, the son of the father who had formerly promised Willy that he would be rewarded for his service to the company has gone back on his father's word by forgetting the salesman in his golden years, throwing away the peel after eating the orange, so to speak. Howard ends the meeting by firing Willy. At the beginning of this scene when Willy is in Howard's office, Howard is preoccupied with his new purchase, a wire-recorder, he continues to play it and ignores Willy. ...read more.

He always tries to be noticed by his parents by showing off. When he was young he always told Willly, "I'm losin' weight pop, you notice?" And, now he is always saying, "I'm going to get married, just you wait and see," in an attempt to redeem himself in his mother's eyes. Willy's sons, Biff and Happy, are also failures, but Willy doesn't want to believe this. He wants his sons, especially Biff, to succeed where he has not. He believes his boys are great and cannot understand why they are not successful. Death of a Salesman, is a play, which arouses sympathy in the audience. It shows a man who has tried hard to make something out of his life, but failed greatly to reveal a man who has tried to peruse a false dream, and who has suffered immensely, which resulted in suicide. Willy's surname Lowman, says a lot about him. If you put it into perspective Lowman indicates that you are a low man. So Willy Lowman literally is a low man meaning he is a failure, unsuccessful and a fake. Willy's idol Dave Singleman is a single man. Also this literally means that he is a single man. He is one of a kind and is extremely successful unlike Willy Lowman- the low man. By Louisa Brackley ...read more.