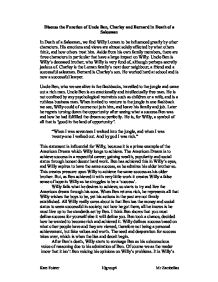 Discuss the Function of Uncle Ben, Charley and Bernard in Death of a Salesman

Discuss the Function of Uncle Ben, Charley and Bernard in Death of a Salesman In Death of a Salesman, we find Willy Loman to be influenced greatly by other characters. His emotions and views are almost solely affected by what others think, and how others treat him. Aside from his own family members, there are three characters in particular that have a large impact on Willy. Uncle Ben is Willy's deceased brother, who Willy is very fond of, although perhaps secretly jealous of. Charley is the Loman family's next door neighbour, a friend and a successful salesman. Bernard is Charley's son. He worked hard at school and is now a successful lawyer. Uncle Ben, who we see alive in the flashbacks, travelled to the jungle and came out a rich man. Uncle Ben is an emotionally and intellectually free man. He is not confined by any psychological restraints such as children or a wife, and is a ruthless business man. When invited to venture to the jungle in one flashback we see, Willy could of course not join him, and leave his family and job. Later he regrets turning down the opportunity after seeing what a success Ben was and how he had fulfilled the dream so perfectly. He is, for Willy, a symbol of all that is "good in the land of opportunity". ...read more.

This shows us that Ben is a very close, admired and special character to Willy because he sees him as such good guidance. This suggests that Willy thinks Ben is the one person who understands him best, and is most like him, yet Ben and Willy are complete opposites. Ben is a rich successful happy man, while Willy is a deceitful struggling failure just trying to live up to the standards of his older brother. Charley is the perfect example of someone who has fulfilled completely the American dream. He has worked hard all his life, been honest, and is now a success. Willy envies this, but cannot understand how he did. He is confused as his own formula for success has broken down, though he would never admit this. Charley helps break down Willy's belief that to be well-liked is the most important quality in a salesman, and that it is in fact hard work and skill (qualities that charley evidently has shown throughout his career). When Willy's career begins to fail, charley, being a decent man, is the one to help him out. He lends him $50 per week so Willy can pretend to Linda that the money is his salary. This is intended to help but in the long run, this probably adds to the problems leading to his downfall. ...read more.

They taunt him for worrying about school and his future, which is interesting that we see Bernard later on in the play as a successful Lawyer because it frustrates willy that Bernard has achieved all of his dreams and doesn't seem to have the 'sparkling personality' he and his sons have. Bernard is a constant reminder of what biff could/should have been, if biff had taken his advice. It is a complete turnaround from their teenage years, when Biff was popular and Bernard was the unpopular one that was taunted and not accepted; whereas now Bernard is the success and Biff will not be accepted (by people and different careers). Bernard is a symbol for the hard work needed to achieve the American dream. His presence clearly shows how differently Biff and Happy have been brought up to Bernard. ????? All of these three characters affect Willy greatly, whether it be his dreams, parenting or morals. The function of these characters is to enhance our background knowledge of willy which means we gain an improved understanding of him and what has influenced him. They add other outside opinions and views to a play very focused on one family with all the same disillusions. Each of these men show wisdom, intelligence and self-knowledge; all qualities Willy lacks, which provides an interesting contrast. The great success of these characters helps to highlight the tragic flaws that willy possesses, and will cause his failure and downfall. Kate Foister 10group4 Mr Zambellas ...read more.