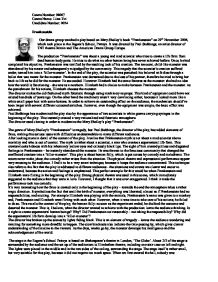 Discussing a play based on Mary Shelleys book Frankenstein.

Frankenstein Our drama group watched a play based on Mary Shelley's book "Frankenstein" on 29th November 2006, which took place in the Regent's School, Pattaya. It was directed by Paul Stebbings, an artist director of TNT theatre Britain and The American Drama Group Europe. The production "Frankenstein" was about a young and mad scientist who tries to create a life form from dead human body parts. He tries to do what no other human being has never achieved before. Once, he had completed his objective, Frankenstein was terrified by the resulting look of his creation. The innocent, child-like monster was abandoned by his master and subsequently misjudged by the community. This tragedy that the scientist's creation suffered under, turned him into a 'killer-monster'. In the end of the play, the scientist was punished: his beloved wife dies through a bullet that was meant for the monster. Frankenstein was devastated due to the loss of his partner, therefore he tried to bring her back to life as he did for the monster. He succeeded. However Elizabeth had the same features as the monster: she had no idea how the world is functioning - she was as a newborn. Elizabeth had a choice to make between Frankenstein and the monster. As the punishment for his actions, Elizabeth chooses the monster. The director makes the old-fashioned myth futuristic through using machinery as props. This kind of equipment could have not existed hundreds of years ago. On the other hand the machinery wasn't very convincing either, because it looked more like a white small paper box with some buttons. In order to achieve an outstanding effect on the audience, the mechanism should've been larger with several different coloured switches. However, even though the equipment was simple, the basic effect was achieved. Paul Stebbings has modernized the play also by the appearance of two scientists in white gowns carrying syringes in the beginning of the play. ...read more.

Therefore bright light suggested that it was daytime. Blackouts helped the actors to change the set of the scene as well as showed to the audience that more time has passed (meaning days or weeks). Just before and during the scene where the monster was pressuring and threatening Frankenstein, the other actors, Elizabeth and the backstage staff were removing one of the man props, cage, from the set. Most of the sound effects used were recorded sounds. The acoustics of the auditorium was reasonably good, because it was heard until the end of the audience's sitting area. It felt as if it is all around me, not coming from only one source - the sound was echoing in the auditorium. The loudspeakers weren't visible for the audience, which is positive point to mention. The music used in the play was very modern, upbeat/dance and rhythmic. It's other evidence of the futurism of the play. It contrasts greatly with the characterization of the actors, which is rather old-fashion. Elizabeth was wearing a red Victorian dress, which is another significant comparison of the music. At Victorian time such music did not existing. Even though the director wanted put across the idea of cloning, but at the same time maintain the old roots of the myth, through contrasting the music and costumes, I think that it ruined the atmosphere. The mood was mixed with nineteenth century and modern fresh and busy life. The serious and technical illustration of the stage was combined with the upbeat/dance music. The stage had a scientifical image: it included machinery, for bringing the monster alive, and it was quite simple (meaning that it wasn't packed with props). I found it quite unnatural mixture, because the common and usual image of any laboratory is quiet, efficient in work and even if there is any music heard at all, then it would be classical style. ...read more.

They failed to do it, which is like a warning to them, that none of those characters should play with life and death. This game wouldn't have a positive ending, but even though the caution was given, Frankenstein continued. This expresses well the human folly and not learning from our own mistakes. Humans are eager to go for what they believe, not for what is actually right. I found some of the weaknesses to lay also in the director's interpretations. The "flirting scene" of Elizabeth and Frankenstein was, I think, too comedy-like. Though it was a very amusing scene, I think that it was over the top, because cloning is such an important and serious issue. The physical theatre helped the audience to understand the situation quicker and clearer, but I think that if the scene would have been less obvious, then the audience would have been wondering more. The relationship would have been more secretive, therefore the audience would have more been concentrated, rather that laughing loudly. I think that the lightning was very well done. The use of different colours was very effective and symbolizing various things. The flashing-lights created horrifying and a very scary atmosphere, which created tension in the audience. But I find that there could be done some improvements on sound. I think that more sounds of nature should have been used, such as innocent bird sound when the monster is killing the laundry lady to symbolize that his intentions were always good and that he never actually meant to kill the lady. During the "bedroom scene", where the monster is threatening Frankenstein, his vocabulary should have been rather poor and his voice not fluent. Grunting and murmuring would have added more sympathy toward the monster, because then he would have been presented as child-like and innocent character. Whilst in the present play he seemed very civilized and used to the world and environment. ?? ?? ?? ?? Centre Number: 98007 Centre Name: Liina Tiri Candidate Number: 0034 ...read more.