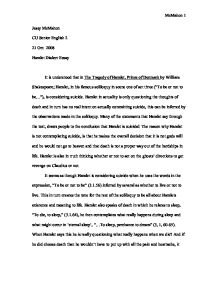 Discussing The Tragedy of Hamlet, Prince of Denmark by William Shakespeare.

Jessy McMahon CU Senior English 2 21 Oct. 2008 Hamlet Dialect Essay It is understood that in The Tragedy of Hamlet, Prince of Denmark by William Shakespeare; Hamlet, in his famous soliloquy in scene one of act three ("To be or not to be..."), is considering suicide. Hamlet in actuality is only questioning the thoughts of death and in turn has no real intent on actually committing suicide, this can be inferred by the observations made in the soliloquy. Many of the statements that Hamlet say through the text, draws people to the conclusion that Hamlet is suicidal. The reason why Hamlet is not contemplating suicide, is that he makes the overall decision that it is not gods will and he would not go to heaven and that death is not a proper way out of the hardships in life. ...read more.

This act of questioning just further explains that Hamlet is thinking of death as just an easy way out of this mess. Although these are two possible explanations to some of Hamlets madness, they're just scratches on the surface to the real Hamlet. On the other hand, a fact that takes us away from the fact that Hamlet might have committed suicide, is when Hamlet begins to talk about the unknown and death. Hamlet seems to be a bit apprehensive about death and what will happen after he dies. A direct example of this is when Hamlet states, "But that the dread of something after death, The undiscovered country from whose bourn, No traveler returns, puzzles the will" (3.1.78-80). Hamlets "puzzled will" (3.1.80) in return makes Hamlet to afraid to take his own life, because he is too worried about the life after death. ...read more.

and from that we are detoured from the fact that Hamlet wants to commit suicide. Even though "To be or not to be" may be considered a matter of life or death to most, we must look at it as just a figure of speech and that Hamlet is not really contemplating suicide, death in this situation is just simply described as an option. From the first line in this legendary soliloquy it can be predicted that a suicidal thought is happening, but in reality Hamlet is just trying to find any type of direction in his confused, unsure yet brilliant mind of his. Hamlet is able to move on and gain knowledge from all the contemplation of life and death in the end, and comes to the final conclusion that he would much rather live and avenge his fathers' death, than die. Not only because life after death terrifies him, but because the revenge is too great for Hamlet to pass up, which in the end is Hamlets weakness. ?? ?? ?? ?? McMahon 1 ...read more.