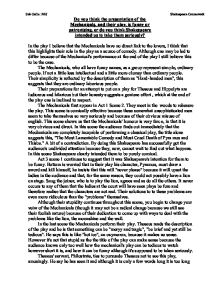 Do you think the presentation of the Mechanicals, and their play, is funny or patronising, or do you think Shakespeare intended us to take them seriously?

Do you think the presentation of the Mechanicals, and their play, is funny or patronising, or do you think Shakespeare intended us to take them seriously? In the play I believe that the Mechanicals have no direct link to the lovers, I think that this highlights their role in the play as a source of comedy. Although one may be led to differ because of the Mechanical's performance at the end of the play I still believe this to be the case. The Mechanicals, who all have funny names, as a group represent simple, ordinary people. If not a little less intellectual and a little more clumsy than ordinary people. Their simplicity is reflected by the description of them as "Hard-handed men", this suggests that they are ordinary laborious people. Their preparations for an attempt to put on a play for Theseus and Hippolyta are ludicrous and hilarious but their honesty suggests a geniune effort , which at the end of the play one is inclined to respect. The Mechanicals first appear in Act 1 Scene 2. ...read more.

It never occurs to any of them that the ladies at the court will have seen plays before and therefore realise that the characters are not real. Their solutions to to these problems are even more ridiculous than the "problems" themselves. Although their stupidity continues throughout this scene, you begin to change your veiw of the Mechanicals (though it may not be a radical change because we still see their foolish nature) because of their dedication to come up with ways to deal with the problems like the lion, the moonshine and the wall. In the last scene the Mechanicals perform their play. Theseus reads the description of the play and he is that something can be "meryy and tragic", "be brief and yet still be tedious". He says this is like "hot ice", an oxymoron, because it makes no sense. However it's not that stupid as the the title of the play can make sense because the audience knows only too well how the mechanical's play can be tedious to watch however short it is, and how it can be funny although it's supposed to be taken seriously. ...read more.

He says, "All for you delights, we are not here" and joins up two parts of separate sentences together. He means to say that their intentions are to delight the audience and that they are not there to upset people. The court finds this hilarious and some begin to make nasty comments and patronise them which continues throughout the play. Quince's speech could've mad sense but it didn't because he presented it poorly. Theseus says the speech is "like a tangled chain; nothing impaired but all disordered." This scene also has the clownish humour of the Mechanicals, Quince's mispunctuated prologue. This scene is not as much farce as the others though because in order to find it humerous you need to understand what Quince intends to say. The Mechanicals represent honesty, decency, loyalty and endeavour yet we are amused by their antics. They are patronised to the extent that it is no longer funny and we feel sympathy for them, thus we are intended to share Theseus' point of veiw, that they are worthy of praise because they mean well and their efforts are true. This suggests that Shakespeare would want us to take them seriously and leave the theatre appreciating the characters. Seb Ostlie 10RJ Shakespeare Coursework ...read more.