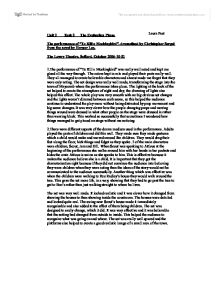 Drama evaluation - To Kill A Mockingbird

Unit 2 Task 3 The Evaluation Phase The performance of "To Kill a Mockingbird", dramatised by Christopher Sergel from the novel by Harper Lee. The Lowry Theatre, Salford, October 2006-10-31 1.The performance of "To Kill a Mockingbird" was really well acted and kept me glued all the way through. The actors kept in role and played their parts really well. They all managed to create believable characters and almost made me forget that they were only acting. The set design was really well made, transforming the stage into the town of Maycomb where the performance takes place. The lighting at the back of the set helped to create the atmosphere of night and day, the dimming of lights also helped this effect. The whole play was very smooth with no big obvious set changes and the lights weren't dimmed between each scene, so this helped the audience continue to understand the play more without being distracted by prop movement and big scene changes. It was very clever how the people changing props and moving things around were dressed in what other people on the stage were dressed in rather than wearing black. This worked so successfully that sometimes I wondered how things managed to get placed on stage without me noticing. 2.There were different aspects of the drama medium used in the performance. Adults played the parts of children and did this well. They made sure they made gestures which a child would make and moved around like children. ...read more.

It created quite a tense and scary mood which fitted well because this is the point when Bob Ewell appears and breaks Jem's arm. Costumes and make-up were used well in the play. The actors wore 1930's typical Alabaman clothing. The costumes showed different authorities with Atticus Finch wearing his suite, and Bob Ewell wearing his old scruffy clothes. Jem and Scout both wore similar clothing showing their close relationship with each other as brother and sister. The costume really helped to bring characters to life. Some actors had more make-up and costume then others such as the person playing Mr Dubose who had to wear make up to make her look old and frail. 3. The action in "To Kill a Mockingbird" was powerful and the plot was though provoking. It explored the theme of racial prejudice and other issues. The main issue was the unfair trial of Tom Robinson, but other issues branched off this. Such as the judgement of people who are different. For example, when the children judge Boo Radley, just because he rarely comes out of his house. The action flowed because there were no big scene changes and the curtains did not close keeping the audience gripped with no distractions. The set/prop movers were dressed just like the other actors on stage so you rarely knew that they'd been on until you noticed something different on the stage. I thought this was clever and effective because again it stopped the audience from getting distracted by major prop movement. ...read more.

That's why it's a sin to kill a mockingbird." The mockingbird is the symbol of innocence which can be destroyed by death. This is a theme that runs throughout the play. Another thing which could also be a symbol is the tree, symbolising the mockingbird, a constant reminder. A flash back was used in the court scene. This was very gripping and effective. Especially when Tom Robinson was saying what actually happened between himself and Mayella Ewell on the day when she accused him of r****g her. The lights dimmed and there was a spotlight on the chair where Tom Robinson was. He told his story in a way that the audience hung off every word. As the story was told, it was also acted out. And then the lights came up and it was back to the court again. The spotlight made the audience blank out the rest of the stage, and just focus on that one part of the set. Overall I believe the performance was really good. It was acted very well with great characterisation. The actors had obviously put a lot of effort into achieving success with their roles. I have learnt that judging people and targeting them before you get to know them isn't right. Much like killing s mockingbird. I have learnt that scene changes have to be smooth without any big distractions to keep the audience connecting with the performance rather than disconnecting because of the curtain coming across or obvious prop movers coming on breaking up the performance. ...read more.