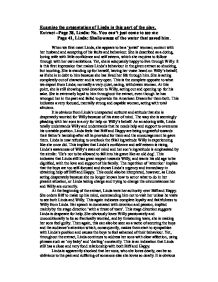 Examine the presentation of Linda in this part of the play.Extract -Page 38, Linda: No. You can't just come to see me Page 41, Linda: Shallowness of the water that saved him.

Examine the presentation of Linda in this part of the play. Extract -Page 38, Linda: No. You can't just come to see me Page 41, Linda: Shallowness of the water that saved him. When we first meet Linda, she appears to be a 'jovial' woman; content with her husband and accepting of his faults and behaviour. She is described as a doting, loving wife with little confidence and self esteem, which she requires to follow through with her own ambitions. Yet, she is adequately happy to live through Willy. It is this first impression that makes Linda's behaviour in the given extract so shocking, but touching. She is standing up for herself, having her voice heard on Willy's behalf, as if she is in debt to him because she has lived her life through him. She is acting completely out of character and is very open. This is the complete opposite to what we expect from Linda; normally a very quiet, caring, withdrawn woman. At this point, she is still showing total devotion to Willy, acting out and opening up for his sake. She is extremely loyal to him throughout the extract, even though he has wronged her in the past and failed to provide the American Dream for them both. ...read more.

The sentence 'You pay him that respect or else your not to come here' suggests Linda is prepared to and confident enough to push forward an ultimatum; one which she is prioritising her husband over her sons. This is a sign of Linda's control over the situation increasing as well as her own personal strength and self-assurance. Linda's character is becoming more eloquent and authoritative, encouraged by her passionate and distressed feelings towards Willy's state of mind and erratic behaviour. The sentence is also a part of a very moving and touching speech from Linda. She loves Biff and Happy but is insensitive and truthful because she wants them to be aware of Willy's situation and less self-focused. She is hurting for Willy. By doing this, Linda is opposing her usual and expected reserved and introvert nature. The short exclamatory phrases used, such as 'And you!' aimed at Biff, illustrates Linda's disgust in Biffs disrespect and insolence towards Willy. Conversely, Biff has a lot of respect and consideration for Linda, more so than Happy because Biff is knowledgeable of Willy's mistreatment of Linda by him having an affair. Biff is also very loyal to Linda without her realising. Although Biff is suspicious that Linda knows of Willy's affair, he refrains from confirming these suspicions as Biff appreciates how attentive Linda is to his father, and how hurt she would be if she found out. ...read more.

is still enforcing guilt and embarrassment upon her sons because she is defending her husband. Willy loved Biff and Happy and deserves admiration off them in return. It is at this point in the extract that Linda becomes entirely in control and dominates the situation. Her confidence rises and she appears more strong and powerful within herself; a comparison to the normally fragile sounding and reserved expected characteristics. Nevertheless, Linda finally submits to her own exhaustion, weariness and desire for support, care and love herself. The short, sharp sentence 'He's dying, Biff' captures the audiences attention towards Linda once more, and she appears to have admitted defeat to the situation; admitted that she can no longer struggle to continue in this position without support and aid off Biff and Happy. Linda is now being illustrated as a frail, weak woman who is mentally, physically and emotionally drained. This obtains the audiences sympathy for Linda as she is the complete opposite to the fervent, powerful and authoritarian character she unpredictably became whilst challenging Biff and Happy about their lack of interest in their father's state of mind. Now, her seemingly altruistic act of pleading with her sons seems to be more for her own benefit. Linda, as well as Willy, needs the concern, care and love of her sons, as she too is exhausted from her own inner turmoil, stresses and strains as well as having to cope with Willy's. ?? ?? ?? ?? ...read more.