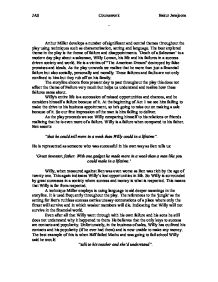 Failures in Death of a Salesman

Failures in Death of a Salesman Arthur Miller develops a number of significant and central themes throughout the play using techniques such as characterization, setting and language. The best explored theme in the play is the theme of failure and disappointments. 'Death of a Salesman' is a modern day play about a salesman, Willy Loman, his life and his failures in a success driven society and world. He is a victim of "The American Dream" destroyed by false promises and ideals. As the play unravels we realize that he more than just a financial failure but also socially, personally and morally. These failures and faults are not only confined to him but they rub off on his family. The storyline shoots from present day to past throughout the play this does not affect the theme of Failure very much but helps us understand and realize how these failures came about. Willy's entire life is a succession of missed opportunities and chances, and he considers himself a failure because of it. At the beginning of Act 1 we see him failing to make the drive to his business appointment, so he's going to miss out on making a sale because of it. ...read more.

He refers to a time before the build up of this area when there were 'two beautiful elm trees'. The world outside Willy's house seems menacing and mean ready to swallow up an economic failure like Willy Loman. Miller uses this technique greatly throughout the play. He includes extensive stage directions to make sure the stage is perfect as it is a large part in the storyline of his play. However Willy's outlook and ideas of life did not only cause his demise but he also affected his boys, Biff and Happy, greatly causing them to fail in life also. He was an indulgent father to his sons and so establishes a 'matey' relationship with them. He is known as their pal and there is not much 'fear or respect' that was necessary for a good father son relationship especially when the play was set. He has transmitted to them an ambiguous morality, failing to set down clear moral standards. For example, he wavers about the incident with Biff taking the football from school without asking the coach. Here Willy laughs with him at the theft, saying halfheartedly, 'I want you to return that'. Willy denies his failure to his family when his boys were young and so they grew up thinking that their father was a successful well known salesman. ...read more.

'Be well liked and you will never want' This is amusing as it is ironic because at the end of the play Willy is in constant debt and wanting to have led a better life. So Willy's theories and ideas about popularity being the key to success were proved wrong by his own sorry life. The end of the play sees Biff confront his father about this issue and Willy could not handle it so commits suicide. This is interesting as his death was a financial failure too as life insurance does not cover suicide. His funeral was a failure because no one apart from his close family Charlie and Bernard came. So no matter how sad it sounds but Willy Loman's life was an entire failure. Until this day Willy Loman is a symbol of failure because of society's false value system. This play is based the mid 20th century when success was achieved through hardwork and industry and wit and charm would not earn you a living and this is the main reason Willy Loman failed in life. The play is one of the great tragedies and is a very depressing experience for the audience. No matter how much Willy deserved to fail because of his poor value and morality we cannot but feel sorry for this confused man. JAS Coursework Bakur Jamjoom ...read more.