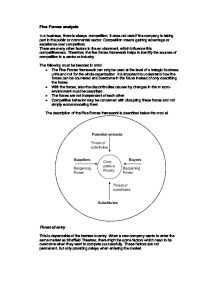 Five Forces analysis In a business, there is always competition; it does not care if the company is taking part in the public or commercial sector. Competition means gaining advantage or excellence over competitors. There are many other factors in the environment, which influence this competitiveness. Therefore, the five forces framework helps to identify the sources of competition in a sector or industry. The following must be bearded in mind: * The Five Forces framework can only be used at the level of strategic business units and not for the whole organization. It is important to understand how the forces can be countered and overcome in the future instead of only describing the forces. * With the forces, also the discontinuities caused by changes in the macro-environment must be described. * The forces are not independent of each other. * Competitive behavior may be concerned with disrupting these forces and not simply accommodating them. The description of the Five Forces framework is described below the model. Threat of entry This is dependable of the barriers to entry. When a new company wants to enter the same market as Sheffield Theatres, there might be some factors which need to be overcome when they want to compete successfully. These factors are not permanent, but only providing delays when entering the market. The market where Sheffield Theatre is operating on, is the market of theatres, and to be more specific, the market of making own new productions and hiring touring companies. ...read more.

* There are a large number of small operators in the supplying industry. * There are substitutes of supply * A part of the product, for example the costs or component, takes a high percentage of the total cost, since buyers want the best price and therefore 'squeeze' suppliers. * The cost of switching a supplier is low or involves little risk. * There is a threat of backward integration by the buyer when suppliers can not obtain quality or prices. There are two types of buyers when taking a look at the case of Sheffield Theatres. The first one is the customers of Sheffield Theatre. They have a lot of power: when the spectators are not coming anymore to the theatre, because the prices are too high, the programme is bad or other substitutes offer better things, Sheffield theatre will lose income. When this happens, the theatre has to invest in a new campaign when possible, which causes new costs, or cut back on the prices and is further depended on the grants they get from the Councils, their sponsors and events. The theatre will not get much extra income of the restaurant and bars, because there are only a few spectators. The second type of buyer is the Theatre itself. The Theatre buys productions from touring companies. When these productions do not attract enough spectators, the Theatre is also losing an income. ...read more.

In Sheffield town itself, there is no other theatre than the Sheffield Theatre. In the neighbor towns, like Manchester and Leeds, there are a couple of theatres. Also in the capital of England, London, there are a couple of theatres. Examples are Royal Exchange Theatre Company in Manchester and City Varieties Music Hall, Leeds Grand Theatre & Opera House and West Yorkshire Playhouse, all in Leeds. The one in Manchester looks like the Sheffield Theatres. It has one studio and one theatre. The prices are between �3.50 and �25. There can be 160 spectators. The music hall originally only had musical productions, but is now mainly a variety theatre with family shows, live music, stand-up comedy, hypnotism, psychic shows and Christmas pantomime. Prices depend on the seat ring and production. The Grand Theatre of Leeds can house 1550 persons. It is the home to Opera North. There is a variety of live performance-staged events - opera, classical and modern ballet, plays, pantomime, star concerts and musicals. There are eight licensed bars and large catering facilities. Again, prices depend on seat ring. This also counts for West Yorkshire Playhouse in Leeds (www.visitbritain.nl) In London there are about 100 theatres. There is something to find for everybody. By car, and almost everybody has one nowadays, and public transport, the theatres in other cities can be reached easily. But all the theatres offer almost the same productions. Therefore, it is not necessary to go away for an evening in a theatre. The competitive rivalry is not high. ...read more.