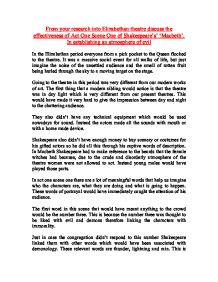 From your research into Elizabethan theatre discuss the effectiveness of Act One Scene One of Shakespeare's' 'Macbeth' - In establishing an atmosphere of evil.

From your research into Elizabethan theatre discuss the effectiveness of Act One Scene One of Shakespeare's' 'Macbeth'. In establishing an atmosphere of evil In the Elizabethan period everyone from a pick pocket to the Queen flocked to the theatre. It was a massive social event for all walks of life, but just imagine the noise of the unsettled audience and the smell of rotten fruit being hurled through the sky to a moving target on the stage. Going to the theatre in this period was very different from our modern works of art. The first thing that a modern sibling would notice is that the theatre was in day light which is very different from our present theatres. ...read more.

In Macbeth Shakespeare had to make reference to the beards that the female witches had because, due to the crude and disorderly atmosphere of the theatre women were not allowed to act. Instead young males would have played those parts. In act one scene one there are a lot of meaningful words that help us imagine who the characters are, what they are doing and what is going to happen. These words of portrayal would have immediately caught the attention of his audience. The first word in this scene that would have meant anything to the crowd would be the number three. ...read more.

"When the hurly-burly's done, when the battles lost and won," this line tells of the sorceresses predicting the future in a twisted but, mystical way. In this scene the three bearded women mentioned the name with Macbeth automatically linking this character and the play with these creatures. 'Graymalkin' and 'Paddock' are mentioned in this scene. The names that the witches are referring to are, not characters but their familiars. In the fifteenth and sixteenth century people were very supertisous and believed that there were witches and that they had demons instructing them (familiars) which took the shape of an animal. The last line in this scene relates to the witches hovering, "through the fog and filthy air", this is just one of many things that the Elizabethan's though witches did. ...read more.