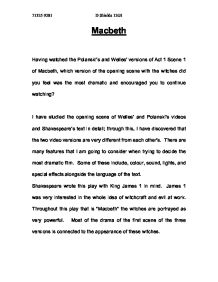 Having watched the Polanski's and Welles' versions of Act 1 Scene 1 of Macbeth, which version of the opening scene with the witches did you feel was the most dramatic and encouraged you to continue watching?

Macbeth Having watched the Polanski's and Welles' versions of Act 1 Scene 1 of Macbeth, which version of the opening scene with the witches did you feel was the most dramatic and encouraged you to continue watching? I have studied the opening scene of Welles' and Polanski's videos and Shakespeare's text in detail; through this, I have discovered that the two video versions are very different from each other's. There are many features that I am going to consider when trying to decide the most dramatic film. Some of these include, colour, sound, lights, and special effects alongside the language of the text. Shakespeare wrote this play with King James 1 in mind. ...read more.

There were loud, dramatic rumbles of thunder. The sky was very dark and cloudy. There was lots of fog and mist which appeared when the witches came into the scene. This gives the audience a sense that something is hidden because we never see the scene very clearly. The music was more dramatic, and loud which really set the scene as the witches entered in Welles' version Welles' used trumpets and other loud instruments to build up the volume until the scene reached it's climax when the witches appeared.. Although "Welles' Macbeth" was black & white these features made it up. In comparison, Polanskis Macbeth was in colour and a lot earier music, this scene was very glommy, and not much character to it, in comparison to "Welles' Macbeth". ...read more.

more exciting as it shows a great visual part in the opening scene which is very good in detail when all three witches are talking Shakespeare's text. "Polanski's Macbeth" is very dull an not very colourful it mainly used red skies and not many other colours which didn't really draw the viewer to the transmission. The witches are very old and wore ragged clothes, they seemed to be concealing items under the sand. In conclusion I think "Welles' Macbeth" is the most dramatic, this is because the scene was set better, and was more understandable, the use of lights, sound, special features, and characters is thought to be very dramatised. So in conclusion "Welles' Macbeth" was better in many areas to "Polanski's Macbeth". 71325 9281 D Shields 12G1 ...read more.