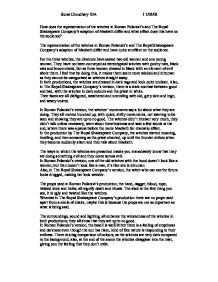 How does the representation of the witches in Roman Polanski's and The Royal Shakespeare Company's adaption of Macbeth differ and what effect does this have on the audience?

Also, in The Royal Shakespeare Company's version, the witch who can see the future looks drugged, making her look weirder. The props used in Roman Polanski's production, the hand, dagger, blood, rope, twisted stick and herbs, all signify death and rituals. The stick is the first thing you see, it is ugly and twisted like the witches. Whereas in The Royal Shakespeare Company's production there are no props used apart from a circle of chairs, maybe this is because the props are not as important as what is being said. The surroundings, sound and lighting, all enhance the wickedness of the witches in both productions; they all show that they are up to no good. In Roman Polanski's version, the beach is well-lit but there is a feeling of emptiness and darkness even though the sun has risen, kind of like nature is responding to their evilness. ...read more.

The camera angles also enhance both productions and make a big difference. In Roman Polanski's production, a long shot is used showing the beach and the emptiness of the place. There is a close-up on the hand and the stick giving them meaning, the hand symbolising death and the stick symbolising evil. There are mid-angle shots on the witches during the ritual and the scene finishes on a long shot showing the witches disappearing into the mist. In The Royal Shakespeare Company's production, the scene starts with a high angle shot. Then low-angle shots of the witches making them seem more powerful than us, as well as separate shots giving a feeling of isolation. Both productions have quite an effect on the audience; this has been achieved by the directors in different ways. Roman Polanski uses a lot of signifiers to get the messages across, which include the scenery, props and sound, whereas The Royal Shakespeare Company's version is set out more as a play, using no props or scenery, apart from a circle of chairs and a black background. Sunia Choudhary 10A 11/05/03 ...read more.