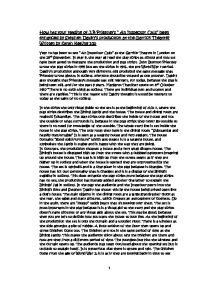 How has your reading of J.B Priestley's " An Inspector Calls" been enhanced by Stephen Daldry's production at the Garrick Theatre? Written by Sarah Keeling 10p Year 10 has been to see " An Inspector Calls" at the Garrick Theatre in London on the 28th September. In year 9, the year all read the play script at school and now we have been asked to compare the production and play script. John Boynton Priestley wrote the play script in 1945 but set the script in 1912, the pre World War 1 period. Daldry's production although very different still produced the same message that Priestley wrote about; in society, everyone should be treated as one another. Daldry also thought that Priestley's message was still relevant, for today, because the play is being seen still, and for the past 9 years. Margaret Thatcher spoke on 31st October 1987 "There is no such thing as society. There are individual men and women and there are families." This is the reason why Daldry thought it would be relevant to today as she talks of no society. In the script the only visual guide to the set is at the beginning of Act 1, where the play script describes the Birling family and the house. The house and dining room are realistic Edwardian. The play script only describes the inside of the house and not the outside or what surrounds it, because in the play script they never go outside so there is no need for knowledge of the outside. The whole story line is set inside the house in the play script. The only room they have is the dining room: "Substantial and heavily comfortable" It is seen as a wealthy house and very elegant. The house contains "good solid furniture" which also means it is a wealthy house, and symbolises the family is stable and is happy with the way they are going. In contrast, the production situates a house and a very small distant house. ...read more.

In contrast with the script he shows more emotion in the production as you are unable to notice the emotion in the script. It helps you understand the play fully if you can feel the emotion form an audiences point of view. The inspector starts asking questions and he shows Mr Birling the photo, but doesn't allow Gerald or Eric to see the picture. His questioning strategy is well thought out, because the Birlings think they have not done wrong, yet he proves them wrong by starting off with a little information and then improving on what the Birlings say. He never showed the same photograph to the others, there was no evidence it was the same girl. "How do you know it's the same photograph?" At the end Gerald works out that it could have been a different photograph each time a person saw it, and then they use there common sense to find out that Inspector Goole isn't an Inspector at all. The inspector is curious to know what is going on, once a person has said something that interests him. "No wait a minute Miss Birling." He performs his job well whether he is or isn't an inspector. The inspector is a good moral influence and is trying to get the Birling's attention towards their actions involving Eva's death. He comes across a little insensitive at the beginning because he interrupts a celebration and upsets people. "I can't stop thinking about it." He disturbs Sheila's mind and she can't let it go, knowing it was partly her fault. Another reason why he is seen as an insensitive person is that he seems to have no personal emotion. "No, I never take offence." The inspector doesn't take any offence to what people say, as if he is not real or only there to make a point to everyone else. He is quite different in the production. ...read more.

Rain was never mentioned in the script, so when it is seen in the production it helps the audience see that Sheila is washed clean. The production does help you understand the script and as Daldry has changed it, it is even easier to understand. I didn't expect the production to be acted out in that way because they had different sets and there were no stage directions showing rain or music. Sheila was a character that changed immensely, between the play script and production. I sympathised more for her in the production because she could look at you and produce an atmosphere that filled the theatre. Sheila is not seen as a very likable character in the script but in the production she is made to be likeable, by using the sympathy to appeal tot eh audience. Edna had the smallest part out of anyone in the script and yet she was on the stage constantly from the beginning to end. I did not expect her to be old in the production, because in the script I didn't keep an open mind to her age, due to I always expect maids to be young and lively. The music added effect to the production that the script did not have. I now understand the storyline more and how the characters would have felt in the situation. I always had my visions of how the script would be acted out, we even performed little sections in class, but I never thought it would be the way Stephen Daldry did. I enjoyed the play, especially when the house blew up. I never thought that the house would blow up, because it was never mentioned in the script, because it was symbolic. The production has enhanced all my views of the characters, the set and the storyline, by being so different to what I imagined. Overall, I think that the production help immensely and it helps me to understand the message that Priestley was trying to portray. 1 ...read more.