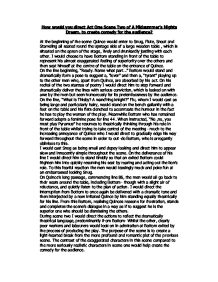 How would you direct Act One Scene Two of A Midsummer's Nights Dream, to create comedy for the audience?

How would you direct Act One Scene Two of A Midsummer's Nights Dream, to create comedy for the audience? At the beginning of the scene Quince would enter to Snug, Flute, Snout and Starveling all seated round the upstage side of a large wooden table, which is situated on the apron of the stage, lively and drunkardly jostling with each other. I would choose to have Bottom standing in front of the table to represent his almost exaggerated feeling of superiority over the others and then seat himself at the centre of the table on the entrance of Quince. On the line beginning, "Ready. Name what part..." Bottom would stand and dramatically form a pose to suggest a, "lover" and then a, "tyrant" playing up to the other men who, apart from Quince, are absorbed by his act. ...read more.

Meanwhile Bottom who has remained forward adopts a feminine pose for line 44. When instructed, "No ,no, you must play Pyramus" he resumes to theatrically thinking through his role in front of the table whilst trying to take control of the meeting- much to the increasing annoyance of Quince who I would direct to gradually edge his way forward throughout the scene in order to out-do Bottom, who is arrogantly oblivious to this. I would cast Snug as being small and dopey looking and direct him to appear slow and innocently simple throughout the scene. On the deliverance of his line I would direct him to stand timidly so that an exited Bottom could frighten him into quickly resuming his seat by roaring and acting out the lion's role. ...read more.

From this Bottom, realising Quinces reasons for frustration, stands and completes the scene's dialogue in a way as if to suggest he is the superior one who should be dismissing the others. During scene two I would direct the actions to reflect the dramatically theatrical language, predominantly from Bottom- Whilst the other, clearly poor workers and labourers would look on in admiration at Bottom exited by the process of producing the play. The purpose of the scene is to create a light-hearted break from the more profound and romantic plot of the previous scene. The contrast of the exaggerated characters in this scene compared to the more seriously realistic characters in scene one would help create the comedy for the audience. ...read more.