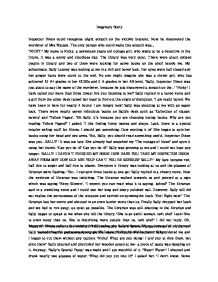 Imaginary Story Inspector Dixon could recognise slight scratch on the victim's bracelet. Now he discovered the murderer of Mrs Watson. The only person who could make this scratch was... 'NICKY!' My name is Nicky, a seventeen years old college girl, who wants to be a detective in the future. It was a sunny and cloudless day. The library was very quiet. There were about sixteen people in library and two of them were looking for some books on the shelf beside me. My schoolmate, Sally Looney was looking at me in a dull and bored look. Her eyes were half closed and her ginger hairs were stuck to the end. No one might imagine she was a clever girl, who has achieved 12 A* grades in her GCSEs and 5 A grades in her AS-level. 'Sally, Inspector Dixon was just about to say the name of the murderer, because he just discovered a scratch on the...' 'Nicky! I have called you more than three times! Are you listening to me?' Sally replied in a bored voice and a girl from the other desk raised her head to find out the origin of disruption. 'I am really bored. We have been in here for nearly 4 hours! I am hungry now.' Sally was shouting at me with an eager look. There were nearly seven ridiculous books on Sally's desk such as 'Collection of classic novels' and 'Yellow Pages'. 'Oh Sally, it's because you are choosing boring books. Why are you reading Yellow Pages?' I asked. 'I like finding funny names and shops. Look, there is a special retailer selling stuff for Aliens. I should get something. ...read more.

'Fay! Are you OK? Oh Fay!' Mr Joyce cried, and Inspector Wilson bit his lip hard. 'Daddy, I love here! I feel like I am Alice in Wonderland! Everything is so small! I am a giant!' Fay said quickly. Mr Joyce said nothing, but crying. Suddenly, I heard a strange sound from the phone. Two seconds later, I discovered what it was. It was the sound of a train and I could hear the same sound outside here. 'Bring 100 000 Pounds, in two hours, then you can meet your daughter again. But if you don't, you won't hear her voice again. Do you see what I mean?' The man threatened Mr Joyce and Mr Joyce's face now became even paler with the horror. Then the phone was hung and we could hear no signal. 'Damn! The conversation was too short! We get no information to get him.' Mr Looney shouted. 'Please get my daughter back! I can't imagine her being...No!' Mr Joyce cried out and Mr Smith tried to calm him down. 'Still, we've got some information. The child mentioned 'Alice in wonderland' and I think it contains meaning.' Inspector Wilson said sharply. 'I think we should investigate theatre or cinema.' He added quickly. Other policemen looked impressed at his quick analysis. 'No, I don't think so. The kidnapper is not so stupid to do so.' I said quickly and Inspector Wilson looked vexed. 'Oh, who are you? You are not a police, are you?' Inspector Wilson made grimaces. 'This is Nicky Christie, my daughter's college friend.' Mr Looney introduced me to Inspector Wilson. 'You are just a kid! Excuse me, we are not kidding.' ...read more.

It was Sally- and he could not resist any more. I phoned Mr Looney and told him what happened. 7 minutes later, about twelve policemen came in and took the kidnapper out. Mr Joyce hugged his daughter half crying and half laughing. Inspector Wilson, on the corner of the floor scribbled on his black diary, with an uncomfortable look. I grinned at him when he looked at my face, but he turned his face quickly. Sally was trying to fix something. 'It was a brand new mobile phone. I should have thrown something cheaper.' The screen of her Samsung mobile phone was cracked and she looked depressed. Mr Smith tried to cheer Sally-'Well, it might be still working.' Mr Looney was working towards us and I could see his red face. 'Stealing the car, driving without license, ignoring speed limit and parking on the bus stop! There was great traffic congestion and we had to sort everything out. Do you know what you have done? Do you want to go to the prison?' Mr Looney yelled angrily and Sally hid behind me. I could see Inspector Wilson's slight grinning. 'But you did a great job. Miss Fay Joyce is safe and no one got hurt. I was so worried. I am glad all of you are safe.' Mr Looney smiled warmly and Sally was now relieved. 'Dad, do we still have to go to prison?' Sally asked in a shaking voice. 'Well, I will sort everything out. Well done. You did an excellent job.' Mr Looney said cheerfully, and Sally's smile got stronger. Only Inspector Wilson looked disappointed and he began to scribble on his black diary again. I could see sunset on my way to home and suddenly wondered. Would that librarian allow me to find out the murderer of 'The cottage of blood'? ...read more.