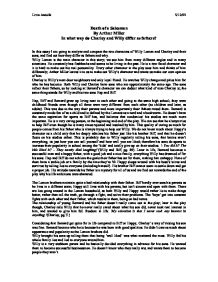 In what way do Charley and Willy differ as fathers?

Death of a Salesman By Arthur Miller In what way do Charley and Willy differ as fathers? In this essay I am going to analyze and compare the two characters of Willy Loman and Charley and their sons, and find out how they differ as fathers and why. Willy Loman is the main character in this story; we see him from many different angles and in many situations. He constantly has flashbacks and seems to be living in the past. He is a two-faced character and it is hard to make out his real personality. Every other character in the play sees him and thinks of him differently; Arthur Miller leaves it to us to make out Willy's character and wants us make our own opinion of him. Charley is Willy's next-door neighbours and only loyal friend. He watches Willy change and pities him for who he has become. Both Willy and Charley have sons who are approximately the same age. The sons reflect their fathers, so by looking at Bernard's character we can deduct what kind of man Charley is; the same thing stands for Willy and his two sons Hap and Biff. Hap, Biff and Bernard grew up living next to each other and going to the same high school; they were childhood friends even though all three were very different from each other (as children and later, as adults). ...read more.

The Loman brothers maintain quite a bad relationship with their father. Biff hardly ever sees his parents as he lives in a different state; Happy still lives with his parents, but isn't sincere and open with them. There are lies going around in the Loman household, as both Willy and Happy would rather lie to make things better, rather than tell the truth, go through a fight, and solve their problems. The 'boys' get into constant fights with each other and their father, which results in them, being on bad terms. The relationship of young Bernard and his father doesn't really come out in the play; later in the play though, Charley tells Willy that he never really cared about what his son did, never took real interest in him, and wanted to give him full freedom in life: 'My salvation is that I never took any interest in anything.'(Charley, pg.71) Considering that Bernard got quite far in life compared to Biff or Happy, Charley' s way of raising his son was fine. Bernard became who he is because he was born with good qualities. He didn't care as much about appearance and popularity as the Loman brothers did. Willy brought his sons up telling them that being 'well liked' was what mattered the most. ...read more.

He becomes so touched when he misunderstands Biff' s tears, and thinks that his son is crying because he loves him so. Charley on the other hand doesn't care too much about love; he tries to show his concern for people by always being there for them and staying loyal and honest. He does not lie to his son or to anyone else to make himself seem better than he really is. I think that the major difference between Charley and Willy is that Willy has too much pride in himself and is afraid to reveal the real him to his sons. He chooses to live by lies, so hopefully his sons get further in life. He also hesitates a lot about the way of raising his boys. Several times, he asks his dead brother for advise, in his flashbacks: 'Oh, Ben, that's good to hear! Because sometimes I'm afraid that I'm not teaching them the right kind of - Ben how should I teach them?'(Willy, pg. 35) Charley is not concerned about appearance and wants to make sure that his son will do fine on his own when he grows up. He does this by enforcing that studying is very important if you want to get somewhere in life. He shows his son a good example by working hard and being honest to people. He also has a better sense of priority than Willy. Livia Antolik 5/12/03 ...read more.