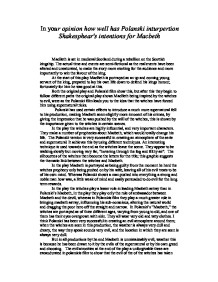 In your opinion how well has Polanski inturpertion Shakesphear's intentions for Macbeth MacBeth is set in medieval Scotland during a rebellion on the Scottish kingship. The actual time and events are semi-fictional as the real events have been altered and unsaturated, to make the story more exciting for the audience and more importantly to win the favour of the king. At the start of this play MacBeth is portrayed as an up and coming young servant of the king, prepared to lay his own life down to defend his kings honour, fortunately for him he was good at this. Both the original play and Polanski film show this, but after this they begin to follow different paths the original play shows MacBeth being inspired by the witches to evil, were as the Polanski film leads you to the idea that the witches have forced him using supernatural tricks. ...read more.

The silhouettes of the witches then become the letters for the title; this graphic suggests the thematic link between the witches and Macbeth. In the play Macbeth is portrayed as being guilty from the moment he herd the witches prophecy only being pushed on by his wife, leaving all of his evil treats to be of his own mind. Whereas Polanski shows a man pushed into everything a strong and noble man how was, a little weak of mind and easily persuaded to do evil for the long term rewards. In the play the witches play a lesser role in leading Macbeth astray than in Polanski's Macbeth, in the play they play only the role of ambassador between Macbeth and the devil, whereas in Polanskis film they play a much greater role in bringing macbeth astray, influencing his sub-conscious, altering the natural world and dragging the poor hero off the straight and narrow. ...read more.

of the of the witches has taken In your opinion how well has Polanski inturpertion Shakesphear's intentions for Macbeth over him, or at least for the moment. Roman Polanski's version of the play doesn't change too much as it is for a cinema audience, and the people viewing it would have paid and would have been expecting a more conventional, unchanged 'Macbeth' because they made a deliberate choice to view it. Thou by the end of play Macbeth have seen the error of this ways but by this time is to late, he realises that he has been tricked by the witches during the big climax of the play where he is fighting for his life. In this battle all his sins melt away and as he fights bravely to the death, reclaiming all the bravery, honour and valour he started the play with. ...read more.