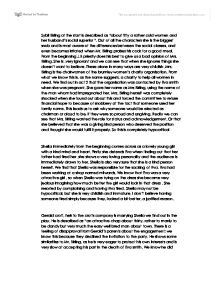 Sybil Birling at the start is described as "about fifty a rather cold women and her husband's social superior ". Out of all the characters she is the biggest snob and is most aware of the differences between the social classes, and even becomes irritated when Mr. Birling praises his cook for a good meal. From the beginning J.B priestly does his best to give us a bad opinion of Mrs. Birling. She is .very ignorant and we can see that when she ignores things she doesn't want to believe. These alone in many ways are very childish .Mrs. Birling is the chairwomen of the brumley women's charity organisation. From what we know this is, as the name suggests, a charity to help all women in need. ...read more.

So this is completely hypocritical Sheila immediately from the beginning comes across as a lovely young girl with a kind mind and heart. Firstly she defends Eva when finding out that her father had fired her .she shows a very loving personality and the audience is immediately drawn to her. Sheila is also very sure that she is a kind person herself. We find that Sheila was responsible for the sacking of Eva. Eva had been working at a shop named milwards. We know that Eva was a very attractive girl , so when Sheila was trying on the dress she became very jealous imagining how much better the girl would look in that dress . ...read more.

We know he did actually have some feelings towards Eva because he tried to get her lodgings in a friends flat , he tells the inspector that he did this "because I was sorry for her ", " she was young and pretty and warm hearted - and intensely grateful". He mentioned that she was grateful , this suggests that perhaps one of the real reasons he did it was because it gave him appeasement for what he did to Sheila , giving him a feeling if helping someone in need . In act 3 he does his best to prove the inspector as a fake, picking out every piece of evidence he could muster. He seems to only be trying to protect himself rather than change like Sheila did. He does not change at the end of the play, and he does not think he has done anything wrong. ...read more.