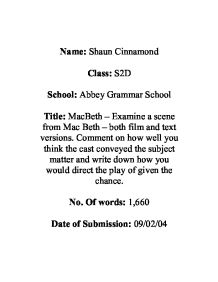 MacBeth - Examine a scene from Mac Beth - both film and text versions. Comment on how well you think the cast conveyed the subject matter and write down how you would direct the play of given the chance.

Name: Shaun Cinnamond Class: S2D School: Abbey Grammar School Title: MacBeth - Examine a scene from Mac Beth - both film and text versions. Comment on how well you think the cast conveyed the subject matter and write down how you would direct the play of given the chance. No. Of words: 1,660 Date of Submission: 09/02/04 Macbeth Assignment "A play, usually intended for performance by living actors on the stage for an exciting or distressing event". That is how the dictionary defines drama. However its origins are not clear. It is reckoned Drama has been around for hundreds of years and is believed to have started in Roman times as a source of entertainment for ceasers' and rulers. Back then though drama would have been performed in front of small crowds usually of great importance with little effort and props. Since then drama has changed greatly and has undergone many changes. It has become a main part in everyday life as a form of entertainment. One of the greatest dramatists ever is William Shakespeare. There is not a complete account on his life and has life is based around few facts. Shakespeare was born in 1564 to John Shakespeare and Mary Arden. Shakespeare's father John was a glover and became Mayor of Stratford-upon-Avon. Shakespeare attended Grammar School in Stratford and learnt English, Greek, Latin and the Bible. After that however there is doubts to what route Shakespeare took after school, one account says he was apprenticed to a butcher because of decline in his father's business and another says he became a school master. ...read more.

We then see the cauldron bubbling rapidly and start to see what is going into it. We then hear the different voices and then there is a close up of inside the cauldron. We then see a ghostly picture of a noose, which makes us wonder what is happening, it creates a sense of mystery. One witch says, "When shall we three meet again?" whilst the witch speaks fire rises from the cauldron. This shows that the witches have power and magic. As the witches are talking they plunge their hands into the cauldron, which creates further mystery and arouses our curiosity. Things move very fast in the cauldron and a close up of the cauldron then takes up the whole screen. A lump of clay is then pulled out by one of the witches and the witch shapes it into human form. At this point the word Macbeth is said at the end of a drum roll then the scene ends. In this version the witches speak in unison and Welles' portrays the witches as a force. His version is stereotypical of witches as they are dressed in black and they are with a typical cauldron. It is a mysterious version as it is rushed and happens quickly and the sounds in the background are effective. Roman Polanski directs the other version I looked at. Polanski collected a few Oscars with his production of the Pianist. Polanski had a hard life and sad upbringing. ...read more.

The assistant manager would be around 35/40 and he would also be wearing the club tracksuit, he would rarely speak and wouldn't be all that important and when he does he is very quiet and speaks in a low voice. Macbeth would be a young footballer playing for a top club in Scotland and the witches believe he will go on to represents Scotland at international level. Macbeth would be a down-to-earth character who is quite shy and who walks normally. I would keep to the same lines as the pay. I would also use a lot of silence to build up tension. All the characters speak with a Scottish accent. Drama today is not what it was, it has changed significantly and what way once performed on a stage is brought to the comfort pf our homes by television, video and DVD. Still, Shakespeare's work is renowned. In his day Shakespeare was equal in popularity with soap shows. Boaz Lurhman sees Shakespeare as a "fantastic storyteller" and "incredibly popular". Ian McKellen a Shakespearean actor and film star believes Shakespeare is "not old fashioned; he is bang up to date" in reply to critics who criticise Shakespeare's work. At any one time there is a Shakespeare play being acted somewhere in the world. His work will forever be performed as Drama evolves as people like McKellen, Welles and Lurhman will make sure Shakespeare's work moves with time. This is easily done as changes in cinema have meant we can approach a 400-year-old play as if it were a new script. ...read more.