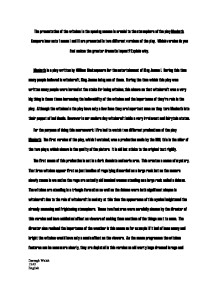 Macbeth The presentation of the witches in the opening scenes is crucial to the atmosphere of the play Macbeth. Compare how acts 1 scene i and iii are presented in two different versions of the play. Which version do you feel makes the greater dramatic

The presentation of the witches in the opening scenes is crucial to the atmosphere of the play Macbeth. Compare how acts 1 scene i and iii are presented in two different versions of the play. Which version do you feel makes the greater dramatic impact? Explain why. Macbeth is a play written by William Shakespeare for the entertainment of King James i. During this time many people believed in witchcraft, King James being one of these. During the time which this play was written many people were burned at the stake for being witches, this shows us that witchcraft was a very big thing in these times increasing the believability of the witches and the importance of they're role in the play. Although the witches in the play have only a few lines they are important ones as they turn Macbeth into their puppet of bad deeds. However in our modern day witchcraft holds a very irrelevant and fairytale status. ...read more.

As i was watching this production of Macbeth i was entranced by the appearance of the witches and i can say honestly that i was not bored in school (for once). The third scene begins on the heath once again the three witches are standing in a triangle. Behind the three witches is fog and nothing can be seen very far off this was taken from the original text by the director "Fog and filthy air." The weather in this production seems a very important feature to the director as she concentrates on creating the right atmosphere with it in particular. The director realized the significance of the three-sided shape in the supernatural world and this adds the spookiness to these scenes. The director's portrayal of the witches is very important for having the desired effect on the audience and she succeeds in using them in the best way possible as in scene iii Macbeth says "Speak if you can. What are you?" ...read more.

The witches in this production are shown to be wearing long false nails and long gold bracelets not unlike gypsies. The witches begin sitting around a pentagram on the floor again they are sat in a triangular formation these are two things associated with the devil. In this scene we see the witches use tarot cards, in modern day these are used for predictions of the future and serve the same purpose in this production they have little effect on me though as these predictions are normally associated with "scams" .In scene iii we are introduced to Macbeth and Banquo they are dressed in air force uniform. The witches appear wearing skates. This serves in confusing Macbeth causing the viewer to become confused also. The witches are also wearing masks the effect of this is to make them seem inhuman. Overall I was disappointed with this version and find it was unconvincing. The production of the witches was neither threatening nor scary and i found the settings boring. I feel that the BBC's version of the play although older, of better quality it has a greater dramatic impact on the viewer. Darragh Walsh 12A3 English ...read more.