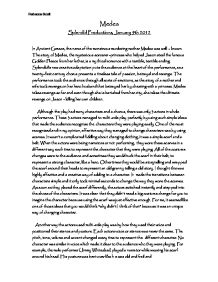 Medea Splendid Productions, January 9th 2012 In Ancient Greece, the name of the monstrous murdering mother Medea was well- known. The story of Medea, the mysterious sorcerer-princess who helped Jason steal the famous Golden Fleece from her father, is a mythical romance with a terrible, terrible ending. Splendid's new creative adaptation puts the audience at the heart of the performance, as a twenty-first century chorus presents a timeless tale of passion, betrayal and revenge. The performance took the audience through all sorts of emotions, as the story of a mother and wife took revenge on her hero husband that betrayed her by cheating with a princess. Medea takes revenge so far and even though she is banished from her city, she takes the ultimate revenge on Jason - killing her own children. Although the play had many characters and a chorus, there was only 3 actors in whole performance. These 3 actors managed to multi-role play perfectly by using such simple ideas that made the audience recognise the characters they were playing easily. One of the most recognised and in my opinion, effective way they managed to change characters was by using scarves. It wasn't a complicated fiddling about changing clothing, it was a simple scarf and a belt. When the actors were being narrators or not performing, they wore these scarves in a different way each time to represent the character that they were playing. ...read more.

It was in unison perfectly and in my opinion it was important that they added humor as it brightened up the performance. The actors performed this very clearly and loud. The actions during the song made it more effective as it added character to the performance and made it more interesting. Also, it involved the audience through laughter. Another reason it was effective was that it focused on the tragic elements of the story but these negative themes were not as harsh as they spoke boldly and humorously about it. The choral speaking had an interesting contrast between conversations and the formal narrative and without it I don't think the performance would have been as enjoyable because it was clear the choral speaking had a great lasting impact on the audience. The actors used direct address to interact with the audience a lot throughout the performance and especially the pre show. I watched them sit and talk with other people but they were completely in character whilst doing this. They all had their scarves around the head and one of the actors had some knitting in her hand, so it was clear that this character was a story telling granny narrator. Repeatedly, they would say "Oh dear" to people. This was effective as you could tell that it was building up to the story and tragedy. ...read more.

Because they added comedy into it and large gestures, it could have had potential to lose confidence as the actors could have felt uncomfortable or embarrassed at one point. The three actors were consistently confident throughout this, and it made it a lot more enjoyable for the audience because of this. I have learnt a lot from the Medea performance and very glad that I got the chance to watch it. It really opened my eyes to ideas and proved to me that if you really put your mind to it, you can come up with such creative, unique and simple ideas that have a huge impact to the audience. It taught me that you don't need to have a huge production with huge costumes and a huge set to create a powerful performance. I will definitely use the costume change ideas for my future work, as I thought the scarves were very effective and a brilliant idea for costume changes. I was inspired by the teamwork and confidence of the actors and that is something I will most certainly use in my work. Splendid productions have taught me that the littlest ideas and details can make a giant impact and it doesn't always have to be a huge productions. I will think a lot more into details in my future work and really work on my character development and all my facial expressions, gestures, voice etc. I have learnt that it really does make a difference from an audiences' perspective. Rebecca Scott Rebecca Scott ...read more.