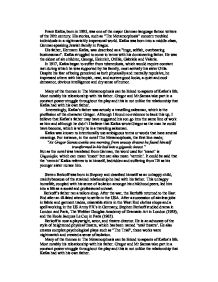 Franz Kafka, born in 1883, was one of the major German-language fiction writers of the 20th century. His stories, such as "The Metamorphosis" concern troubled individuals in a nightmarishly impersonal world. Kafka was born into a middle-class, German-speaking Jewish family in Prague. His father, Hermann Kafka, was described as a "huge, selfish, overbearing businessman". Kafka struggled to come to terms with his domineering father. He was the eldest of six children, George, Heinrich, Otillie, Gabriele and Valerie. In 1917, Kafka began to suffer from tuberculosis, which would require constant rest during which he was supported by his family, most actively his sister Ottla. Despite his fear of being perceived as both physically and mentally repulsive, he impressed others with his boyish, neat, and austere good looks, a quiet and cool demeanor, obvious intelligence and dry sense of humor. Many of the themes in The Metamorphosis can be linked to aspects of Kafka's life. ...read more.

After a succession of aimless jobs in fabric and garment trades, miserable stints in the West End clothes shops and a spell working in the US Army PX's in Germany, Stephen Berkoff studied drama in London and Paris, The Webber Douglas Academy of Dramatic Art in London (1958), and the Ecole Jacques Le Coq in Paris (1965). Berkoff is now a playwright, actor, and theatre director. He is an advocate of the style of heightened physical theatre, which has been named 'total theatre'. He also creates complex psychological plays such as "The Trial", these works were nightmarish and created a sense of isolation. Many of the themes in The Metamorphosis can be linked to aspects of Kafka's life. Most notably his releationship with his father. Gregor and Mr Samsa take part in a constant power struggle throughout the play and this is not unlike the relationship that Kafka had with his own father. ...read more.

Berkoff is now a playwright, actor, and theatre director. He is an advocate of the style of heightened physical theatre, which has been named 'total theatre'. He also creates complex psychological plays such as "The Trial", these works were nightmarish and created a sense of isolation. With this in mind it is easy to understand why Stephen Berkoff chose 'The Metamorphosis' to adapt, and why he chose to portray the novel like he did, using a lot of physical theatre and surreal situations. It would also have been easy for Berkoff to relate to the key issues of the play, i.e. bad family relationships (particularly with his father), social isolation, and badly paying jobs. The play was very popular and audiences were captivated because of its surreal style, which was before its time. The key themes of oppression, isolation, personal identity, family duty, and guilt are timeless themes are issues that an audience will always be able to relate to. ...read more.