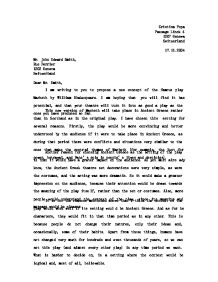 Cristina Popa Passage Linck 4 1207 Geneva Switzerland 17.11.2004 Mr. John Edward Smith, Rue Ferrier 1202 Geneva Switzerland Dear Mr. Smith, I am writing to you to propose a new concept of the famous play Macbeth by William Shakespeare. I am hoping that you will find it has potential, and that your theatre will turn it into as good a play as the ones you have produced so far. This new version of Macbeth will take place in Ancient Greece rather than in Scotland as in the original play. I have chosen this setting for several reasons. Firstly, the play would be more convincing and better understood by the audience if it were to take place in Ancient Greece, as ...read more.

So it would make a greater impression on the audience, because their attention would be drawn towards the meaning of the play itself, rather than the set or costumes. Also, more people would understand the context of the play, since its meaning and message would be clearer. It is for the reasons mentioned above that I think the context of the play would work well if its setting would be Ancient Greece. And as for he characters, they would fit in that time period as in any other. This is because people do not change their natures, only their ideas and, occasionally, some of their habits. ...read more.

In this version of Macbeth, the setting would obviously be in Ancient Greece, and there would be a castle, battlefield, and all the other settings that can be found in the play. However, all the buildings will be built in Ancient Greek architecture style. The costumes would also be very simple. They would consist of ... and ... for men, and ... and ... for women. The richer and more important characters would be dressed in clothes made of finer material, darker colours (for example, blood red, deep purple, and midnight-blue), preferably embroided with silver or gold thread. The poorer and less important characters would be dressed in cheaper, thinner clothes, which would be white, cream or beige in colour. The soldiers would be dressed in expensive-looking armour and cloaks, and other garments Greek soldiers wore. Respectfully, Cristina Popa ...read more.