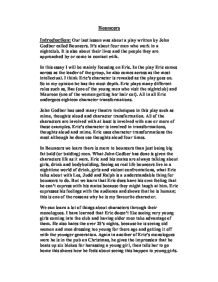 Our last lesson was about a play written by John Godber called Bouncers. It's about four men who work in a nightclub. It is also about their lives and the people they are approached by or come in contact with.

Bouncers Introduction: Our last lesson was about a play written by John Godber called Bouncers. It's about four men who work in a nightclub. It is also about their lives and the people they are approached by or come in contact with. In this essay I will be mainly focusing on Eric. In the play Eric comes across as the leader of the group, he also comes across as the most intellectual. I think Eric's character is revealed as the play goes on. So in my opinion he has the most depth. Eric plays many different roles such as, Baz (one of the young men who visit the nightclub) and Maureen (one of the women getting her hair cut). ...read more.

But we learn that Eric does have his own feeling that he can't express with his mates because they might laugh at him. Eric expresses his feelings with the audience and shows that he is human; this is one of the reasons why he is my favourite character. We can learn a lot of things about characters through their monologues. I have learned that Eric doesn't like seeing very young girls coming into the club and having older men take advantage of them. He also hates the over 25's nights, because he is seeing old women and men dressing too young for there age and getting it off with the younger generation. Again in another of Eric's monologues were he is in the pub on Christmas, he gives the impression that he beats up six ...read more.

I think Eric has had a bad experience with a young girl, or has a daughter of which he has lost somewhere in his life. I know this from the sub textual clues he gives in his monologues. He says how much he despises the men taking advantage of the young women. He also hates seeing young girls throw their lives away in one night just for a laugh. To me this shows that deep down he is a really nice guy. When Eric I out of work I think he would still be protective over young girls, and that he would in a way come to the rescue if he saw anything bad happen to a girl. I also think he would be a nice guy to talk to. To me I think Eric is everything a stereotype bouncer wouldn't be. ...read more.