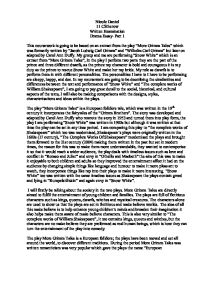 Nicole Daniel 11 Clitherow Written Examination Drama Essay- Part 1 This coursework is going to be based on an extract from the play "More Grimm Tales" which was formerly written by "Jacob Ludwig Carl Grimm" and "Wilhelm Carl Grimm" but later on adapted by Carol Ann Duffy. My group and me are performing "Snow White" which is an extract from "More Grimm Tales", In the play I perform two parts they are the part of the prince and three different dwarfs, as the prince my character is bold and courageous it is my duty as the prince to rescue Snow White and make her my bride. My role as dwarfs is to perform them in with different personalities. The personalities I have to I have to be performing are sleepy, happy, and doc. In my coursework am going to be describing the similarities and differences between the text and performance of "Snow White" and "The complete works of William Shakespeare", I am going to pay great detail to the social, historical, and cultural aspects of the texts, I will also be making comparisons with the designs, styles, characterisations and ideas within the plays. The play "More Grimm Tales" is a European folklore tale, which was written in the 19th century it incorporates the fairytales of the "Grimm Brothers". ...read more.

The play More Grimm Tales is a European folklore; the plays have been moved and set all around the world, to discover different traditions. During the period More Grimm Tales was written romanticism was very popular which gave the plays the name "European Romanticism". To enhance the plays modernised them and incorporated cultural influences into their work, for example accents, props and costumes. Whereas although "The complete works of William Shakespeare" is too a European tradition making them well know in many different countries and traditions. They incorporate different cultural influences into their plays for example they use rap to tell an entire play produced by William Shakespeare, they also use cultural influences like voice, race and costumes which were used to help modernise the play. Grimm Tales is written as "Story telling theatre" which will always contain a narrator, meaning the audience is constantly being addressed, not only from the narrator but various other characters within the play. The idea of story telling theatre is to interact more with the audience, to help them feel more connected with the play and what is going on around them, it helps them understand and puts them in the shoes of the characters. Even though "The complete works of William Shakespeare" isn't story telling theatre they to interact a lot with the audience, they use different techniques like pantomime, which helps the actors step out of their role to directly talk to the audience and involve them in the play. ...read more.

This is similar to "The Complete works of William Shakespeare" as they base their stories on right and wrong" and tragedy heroes, so they too create a contrast between good and bad jus like More Grimm Tales. The designs of both plays are minimal set which means both plays require very little set, this helps the audience concentrate fully on the performance of the actors. It also helps strive the actors to perform better, putting them in the spot light all the time. The use of extravagant and distinct costumes helps the performance along. "The complete works of William Shakespeare" too also uses minimal set; they want the audience to pay great attention to the performance of the actors and their sufficient acting techniques. Meaning neither play would need an extravagant set. I have enjoyed working on More Grimm Tales and being able to show what contrasts and differences it has to "The complete works of William Shakespeare". I've had fun doing More Grimm Tales as me and my group have been able to adapt it and make it our own, we've been able to turn the script into our own personal style. It's been good to look at the differences as it's helped to broaden our minds and give us a range of ideas for the future. I have learnt how to use story telling theatre and how I can interact and address the audience more. It's helped me to push myself to my limits and perform at the best of my ability. ...read more.