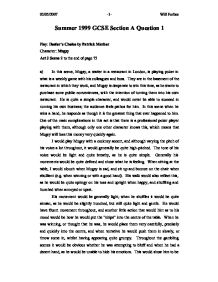 Summer 1999 GCSE Section A Question 1 Play: Dealer's Choice by Patrick Marber Character: Mugsy Act 3 Scene 2 to the end of page 75 a) In this scene, Mugsy, a waiter in a restaurant in London, is playing poker in what is a weekly game with his colleagues and boss. They are in the basement of the restaurant in which they work, and Mugsy is desperate to win this time, as he wants to purchase some public conveniences, with the intention of turning them into his own restaurant. He is quite a simple character, and would never be able to succeed in running his own business; the audience feels pathos for him. In this scene when he wins a hand, he responds as though it is the greatest thing that ever happened to him. One of the main complications in this act is that there is a professional poker player playing with them, although only one other character knows this, which means that Mugsy will lose this money very quickly again. I would play Mugsy with a cockney accent, and although varying the pitch of his voice a lot throughout, it would generally be quite high-pitched. The tone of his voice would be light and quite breathy, as he is quite simple. Generally his movements would be quite defined and show what he is feeling. ...read more.

When no one else laughs, I would look at the table briefly, before remembering to deal the next cards. When Frankie gets annoyed with Mugsy, I would say "Suicide king you lose automatically," condescendingly, as though he should have remembered the rules, and known better than to question. To emphasise that he ought to have known better, I would start the sentence frowning, then start to shake my head, finishing with wide eyes, and shut mouth as though thinking "what can I do," and taking a heavy breath. This would again be Mugsy acting as though he was in charge just because he was dealing. In reply to Sweeney's anger, I would speak quietly, but excitedly, and bending over the table I would start to bounce on my chair. On dealing myself the final card I would say "Four of hearts," ebulliently, and bouncing up and down on my seat. I would pause, as though I had won, and on realising that I had to put money into the centre, I would try and overcome this thrill, and act normally, although not quite managing to do so. When Sweeney puts all of his money into the centre of the table. I would pause before saying "Call" calmly, with my elbows on the table and my chin resting on my hands. ...read more.

One of the few times when he actually talks about himself consciously is when he says that he does "go on a bit sometimes," but his "relentless inability to recognise his own inadequacies" means that he won't see his incapability to run his own business. He just wants to be like the others, and thinks that he "knows how to handle a business situation," and that he "will steal your trade" referring to Stephen's restaurant. He even has ideas to "make my restaurant teetotal," which is possibly the most idiotic thing to make a restaurant in the Mile End Road, however Mugsy thinks that it will make his restaurant original, the main reason being that most other teetotal restaurants have gone bankrupt through lack of custom. I would therefore play Mugsy as a child, as his character is a very simple one, shown most powerfully if, like a child, he changes between extreme emotions very quickly. The reality of it is that Mugsy does not really have anything exciting in his life to look forward to, except poker, and so exaggerates his behaviour a lot to make his life seem interesting. I would play him as though he thinks himself superior too, as Mugsy is a character who has no real status or indeed respect, and so tries to muster as much self importance as possible whenever and wherever possible. 02/05/2007 -1- Will Forbes ...read more.