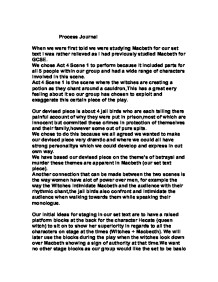 Process Journal When we were first told we were studying Macbeth for our set text I was rather relieved as i had previously studied Macbeth for GCSE. We chose Act 4 Scene 1 to perform because it included parts for all 5 people within our group and had a wide range of characters involved in this scene. Act 4 Scene 1 is the scene where the witches are creating a potion as they chant around a cauldron,This has a great eery feeling about it so our group has chosen to exploit and exaggerate this certain piece of the play. Our devised piece is about 4 jail birds who are each telling there painful account of why they were put in prison,most of which are innocent but commited these crimes in protection of themselves and their family,however some out of pure spite. ...read more.

Our initial ideas for staging in our set text are to have a raised platform blocks at the back for the character Hecate (queen witch) to sit on to show her superiority in regards to all the characters on stage at the times (Witches + Macbecth). We will later use the blocks during the play when the witches look down over Macbeth showing a sign of authority at that time.We want no other stage blocks as our group would like the set to be basic so we can use all the space to our advantage. Our initial ideas for staging in our devised piece are to place a large bulk tower of boxes to represent a lampost one of the places where a woman commits her crime.At the front ...read more.

but the audience knows from her previous exploit when she is possessing the witches that she is not a character to reckon with. Our group have developed Macbeth by performing witches in a variety of ways to see which witch personality and more appropriate and effective to our production. We also had to change our scenes as my characters didnt have enough lines to say for me to be assessed on.We mainly developed our piece by talking about the idea's we had and seeing if they worked well with our performance,for example when Elizabeth thought we should have no props for Macbeth to make it more plain and theatre used to be like when Macbeth was written.This was our groups strong point as everyone always had a new idea to improve or make a scene more interesting. ...read more.