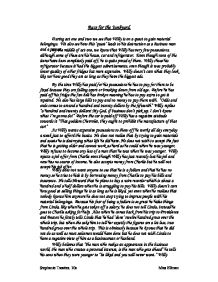 Race for the Junkyard - review.

Race for the Junkyard. During act one and two we see that Willy is on a quest to gain material belongings. We also see how this 'quest' leads to his destruction as a business man and a person. By the middle of act one, we know that Willy has very few possessions, although some of these are his house, car and refrigerator. Even though none of the items have been completely paid off, he is quite proud of them. Willy chose his refrigerator because it had the biggest advertisements, even though it was probably lower quality of other fridges but more expensive. Willy doesn't care what they look like nor how good they are as long as they have the biggest ads. By the time Willy has paid for his possessions he has to pay for them to be fixed because they are falling apart or breaking down from old age. ...read more.

He does not wish to accept the fact that he is getting older and cannot work as hard as he could when he was younger, Willy refuses to become any less of a man than he was when he was younger. Willy rejects a job offer from Charlie even though Willy has just recently lost his job and now has no source of income, he also accepts money from Charlie but he will not accept his job offer. Willy does not want anyone to see that he is a failure and that he has no money so he tries to hide it by borrowing money from Charlie to pay his bills and insurance. He tells Howard that he plans to buy a wire recorder which is about a hundred and a half dollars when he is struggling to pay his bills. ...read more.

is the man who gets ahead" he tells his sons when they were younger to "be liked and you will never want." Willy thinks that if you have many expensive possessions you will be well like by everyone who knows of you, so he tries his hardest to gain assets to 'show off' how popular he is. Willy tries to use material possessions to get ahead in life, but instead it sets him behind even further. No matter what happens to the Loman family Willy continues to try to fulfil the American dream. Willy is so obsessed with the materialist side to his life that he is willing to go to his neighbour and borrow fifty dollars every week to keep his reputation from sliding. As Willy has this infatuation with material belongings he ends up being 'placed on the scrap heap' and slowly deteriorating mentally and physically. Stephanie Twaites. 10s Miss Ellman ...read more.