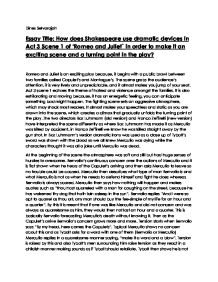 Dines Selvarajah Essay Title: How does Shakespeare use dramatic devices in Act 3 Scene 1 of 'Romeo and Juliet` in order to make it an exciting scene and a turning point in the play? Romeo and Juliet is an exciting play because, it begins with a public brawl between two families called Capulet's and Montague's. The scene grabs the audience's attention, it is very lively and unpredictable, and it almost makes you jump of your seat. Act 3 scene 1 echoes the theme of hatred and violence amongst the families. It is also exhilarating and moving because, it has an energetic feeling, you can anticipate something bad might happen. The fighting scene sets an aggressive atmosphere, which may shock most readers. It almost makes your speechless and static as you are drawn into the scene, which creates a climax that gradually unfolds the turning point of the play .The two directors Baz Luhrmann (old version) and Franco Zeffirelli (new version) have interpreted the scene differently as where Baz Luhrmann has made it as Mercutio was killed by accident, in Franco Zeffirelli we know he was killed straight away by the gun shot. In Baz Luhrmann's version dramatic irony was used as a close up of Tybalt's sword was shown with the blood so we all knew Mercutio was dying while the characters thought it was all a joke until Mercutio was dead. At the beginning of the scene the atmosphere was soft and still but had huge senses of hurdles to overcome. ...read more.

This gets the attention of the audience as it is shown how a small joke turned into such an argument. Also the words that have been said gives indication of how the battle could be taken to the next level and serious consequences could occur. Romeo then tries to stop the fight and tells Mercutio to put his sword away. Tension is raised instantly. Romeo then gets in the way of their fight and reminds them of the prince's threats. Mercutio is then stabbed under Romeo's arms. The two directors have interpreted this part of the fight differently as in Baz Luhrmann's version no one knows that Mercutio was stabbed apart from the audience and Tybalt as he sees the blood on his sword. The Montagues all believe that Mercutio is messing about and he is not really hurt that badly. Tension is raised as we all know that he is really hurt and no one is listening to Mercutio when he says he was hurt because of the others. Romeo doesn't believe that Mercutio is really hurt. Mercutio tells Romeo why did you get involved, I was hurt under your arm. This makes Romeo feel furious and yet his fault and Mercutio was only defending him. Tension is raised as all the blame was then put on Romeo as it was him who got in the way which caused Mercutio to be stabbed. Mercutio then blames both families as it was their fault. This is where Romeo blames himself and states what he did wrong. ...read more.

From the princes speech the audience are then left to think that Romeo will disobey the rule as he cannot stay away from his love and this will then result in a greater punishment or Romeo may find himself into more trouble. But the audience are defiantly shown the facts of the situation and are left to know that Romeo will be desperate and will do desperate things to get to Juliet so then they are left to think only graver mistakes and more deaths are left to come of this. This Scene picks up on and develops on main themes as from the teasing between Mercutio and Tybalt picked up to lead to death, the rage of Romeo led to another death of Tybalt, the frustrated prince's verdict of exile. This scene in the play was the turning point as when Mercutio died this was where it all went wrong and graver mistakes were made creating a tenser much more exciting scene. In my opinion to the scene I think it is an extremely effective scene as it changes the whole story path and create a intense exciting story and also the film adaptions have also created a effective style in this scene as in both versions of the film they are still as effective and tense as one another. It Is an effective scene for the audience as this is where the audience are struck and engaged into the story as from this point all events to come are intense and crucial to the ending of the story. ?? ?? ?? ?? ...read more.