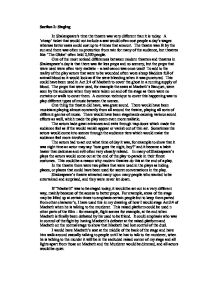 Section 2: Staging In Shakespeare's time the theatre was very different than it is today. A 'cheap' ticket that would not include a seat would often cost people a day's wages whereas better seats could cost up to 4 times that amount. The theatre was lit by the sun and there was often no protection from rain for many of the audience, but theatres like 'The Globe' often held 2,500 people. One of the most noticed differences between modern theatres and theatres in Shakespeare's day is that there was far less props and no scenery, but the props that were used were often very realistic - a real canon was once used! To add to the reality of the play actors that were to be wounded often wore sheep bladders full of animal blood so it would look as if the were bleeding when it was punctured. ...read more.

The actors had to act out what time of day it was, for example to show that it was night time an actor may say 'how goes the night, boy?' and it became a habit heater that darkness and evil often very closely related. In many of Shakespeare's plays the actors would come out at the end of the play to parade in their finest costumes. This could be a reason why modern theatres do this at the end of a play. In the theatre there were two pillars that were used in the plays as hiding places, or places that could have been used for secret conversations in the play. Shakespeare's theatre attracted many upon many people who wanted to be entertained and surprised, and they were never let down. If "Macbeth" was to be staged today, it would be set out in a very different way, mainly because of the access to better props. ...read more.

The ghost in my play would appear to the audience, but also as a normal person in the banquet scene. I would accomplish this by using multiple projectors around the stage that would shine images onto a normal person in the banquet and transform him into Banquo's ghost. When Macbeth is talking to the ghost all lights except one on Macbeth will be put out, and it is only when this is happening that the ghost appears, as it refines the ghost from been seen by other actors in the scene. I feel like that would have a great effect on the audience, and let them see the scene from both Macbeth's and the rest of the actor's view of the scene. The actual ghost will have a grey, instead of white, appearance to show that Macbeth fears him and sees him not as a friend but as an evil being. He will also have blood that drips to the ground but vanishes before it touches anything, which will show that he was murdered. ...read more.