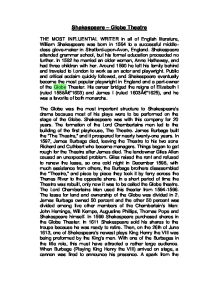 Shakespeare - Globe Theatre THE MOST INFLUENTIAL WRITER in all of English literature, William Shakespeare was born in 1564 to a successful middle-class glove-maker in Stratford-upon-Avon, England. Shakespeare attended grammar school, but his formal education proceeded no further. In 1582 he married an older woman, Anne Hathaway, and had three children with her. Around 1590 he left his family behind and traveled to London to work as an actor and playwright. Public and critical acclaim quickly followed, and Shakespeare eventually became the most popular playwright in England and a part-owner of the Globe Theater. His career bridged the reigns of Elizabeth I (ruled 1558Â"1603) and James I (ruled 1603Â"1625), and he was a favorite of both monarchs. The Globe was the most important structure to Shakespeare's drama because most of his plays were to be performed on the stage of the Globe. Shakespeare was with this company for 20 years. The formation of the Lord Chamberlains men led to the building of the first playhouse, The Theatre. James Burbage built the "The Theatre," and it prospered for nearly twenty-one years. ...read more.

The replacement was completed in 1614 using the same basic design as the previous version. The theater was the same as the old Globe, if not better in all aspects. Shakespeare was still a joint owner, but had retired to Stratford. Just two years later Shakespeare died. The Globe held performances for many more years until 1642. In this year the Puritans closed down all playhouses in London. The Puritans believed that playhouses had nothing to do with God, therefore they were evil. Then, in 1644 the Globe was pulled down so tenements could be built, and it's foundations were buried. In 1949 Sam Wanamaker came to London to look for evidence of the Globe. Although the Globe was not found until October 1989 The first performance in the new Globe was in 1993 but the Globe wasn't even finished at this time. Finally after many years the Globe Theatre is completed on June 12th, 1997. The Globe theatre was made from wood. It was an almost round building hence the nickname "The wooden O". There was place for between 2,000 and 3,000 people. ...read more.

The wealthy sat in galleries. Another penny after that got them a great seat on the stage with a cushion. Theater conditions were extremely unsanitary; as a result, diseases were easily passed around. The audience consisted of mostly courtiers, merchants, lawyers, craftsmen, idlers and roughs all went through he doors together. Those who were in the yard were a mixed bunch of people: shopkeepers with their families, young apprentices, household servants, soldiers, seamen, fish wives, apple sellers, and laborers of all kinds. Women were not allowed to go alone unless they were selling something. A woman had to go with a man to show that she was respectable. The performance would then start at around 2:oo when it was most bright out. Theatres usually held approximately 1500-3000 people, and took about 30 minutes for people to get seated. They were either in a seat, on the grass, or standing,. The Globe Theater was very important in Shakespeare's life, and in the lives of the people in London. The theater gave spectators a chance to step outside of their busy everyday lives and forget about all of their problems. The Globe Theater is also important because it is the place where Shakespeare made a name for himself. ...read more.