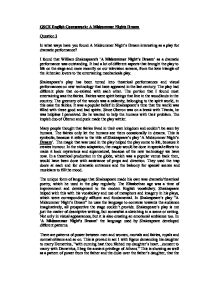 GSCE English Coursework: A Midsummer Nights Dream Question 3 In what ways have you found A Midsummer Night's Dream interesting as a play for dramatic performance? I found that William Shakespeare's 'A Midsummer Night's Dream' as a dramatic performance was outstanding. It had a lot of different aspects that brought the play to life on the stage and more recently on our television screens, from the love triangle of the Athenian lovers to the entertaining mechanicals play. Shakespeare's play has been turned into theatrical performances and visual performances on new technology that have appeared in the last century. The play had different plots that co-existed with each other. The portion that I found most entertaining was the fairies. Fairies were spirit beings that live in the woodlands in the country. The greenery of the woods was a calamity, belonging to the spirit world, in this case the fairies. It was a popular belief in Shakespeare's time that the world was filled with these good and bad spirits. ...read more.

The Elizabethan age was a time of improvement and development to the modern English vocabulary. Shakespeare helped with this with his vocabulary and use of metaphors and imagery in his plays, which were correspondingly affluent and fundamental. In Shakespeare's play "A Midsummer Night's Dream" he uses the language to converse towards the audience imaginatively, all prospective the stage couldn't provide. Shakespeare's play is not just the matter of descriptive writing, but somewhat a sketching in a scene or setting. Not only in visual appearances, but it is also creating an emotional ambience too. In 'A Midsummer Night's Dream' the language used by Shakespeare developed different patterns. There are patterns of power between men and women, mortals and fairies, royals and normal citizens and so on. This is proved in act 1 with Egeus demanding his daughter to marry Demetrius, "with cunning hast thou filched my daughter's heart...consent to marry with Demetrius, I beg the ancient privilege of Athens." This is showing as well as a pattern of power from the father and the duke over the father's daughter, that the Elizabethan age was still in a time of patriarchal society. ...read more.

In the passage in act 5 scene 1 where Pyramus and Thisbe talk to each other, compare themselves to many different lovers, with the minor problem of getting the names wrong. This co-exists with the plot of the Athenian lovers. I think the passage shows that young love can be treated seriously, but can also have a funny side to it from the outsiders, as shown in the play. When the play was chosen by the duke, they all wanted to be centre of attention and because of this messed up the play, which I think resulted in making the audience feel heartbreaking for Pyramus and Thisbe after all they die for their love for each other, and give thanks for their dramatic play. Even though I have seen the video adaptation and read the play, I could still imagine by how the play is set out how amazing it would have been presented in the walls of the globe theatre. Overall I think Shakespeare's play is a dramatic play to watch with all the plots filled with humour, deception and love. I would recommend everyone to watch the dramatic performance. ...read more.