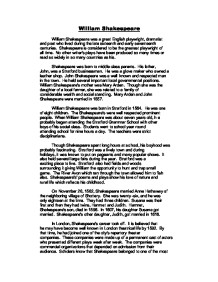 Shakespeare was born to middle class parents. His father, John, was a Stratford businessman

In London, Shakespeare's career took off. It is believed that he may have become well known in London theatrical life by 1592. By that time, he had joined one of the city's repertory theater companies. These companies were made up of a permanent cast of actors who presented different plays week after week. The companies were commercial organizations that depended on admission from their audience. Scholars know that Shakespeare belonged to one of the most popular acting companies in London called The Lord Chamberlain's Men. Shakespeare was a leading member of the group from 1594 for the rest of his career. By 1594, at least six of Shakespeare's plays had been produced. During Shakespeare's life, there were two monarchs who ruled England. They were Henry the eighth and Elizabeth the first. Both were impressed with Shakespeare which made his name known. There is evidence that he was a member of a traveling theater group, and a schoolmaster. In 1594, he became an actor and playwright for Lord Chamberlain's Men. ...read more.

He contributed greatly to the development of the English language. Many words and phrases from Shakespeare's plays and poems have become part of our speech. Shakespeare's plays and poems have become a required part of education in the United States. Therefore, his ideas on subjects such as romantic love, heroism, comedy, and tragedy have helped shape the attitudes of millions of people. His portrayal of historical figures and events have influenced our thinking more than what has been written in history books. The world has admired and respected many great writers, but only Shakespeare has generated such enormous continuing interest. My source states explanations rather than opinions on why Shakespeare's contributions to literature are so vast. My source devoted thirty pages to William Shakespeare. Shakespeare's plays are usually divided into three major categories. These are comedy, tragedy, and history. Three plays which are in the category of comedy are "The Comedy of Errors", "The Taming of the Shrew", and "The Two Gentlemen of Verone". Three plays which are in the category of tragedy are "Romeo and Juliet", "Titus Andronicus", and "Julius Caesar". In the category of history, three plays are "Henry V", "Richard II", and "Richard III". ...read more.