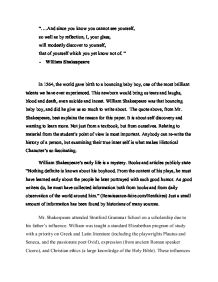 Shakesphere and The Renaissance

"....And since you know you cannot see yourself, so well as by reflection, I, your glass, will modestly discover to yourself, that of yourself which you yet know not of. " - William Shakespeare In 1564, the world gave birth to a bouncing baby boy, one of the most brilliant talents we have ever experienced. This newborn would bring us tears and laughs, blood and death, even suicide and incest. William Shakespeare was that bouncing baby boy, and did he give us so much to write about. The quote above, from Mr. Shakespeare, best explains the reason for this paper. It is about self discovery and wanting to learn more. Not just from a textbook, but from ourselves. Relating to material from the student's point of view is most important. Anybody can re-write the history of a person, but examining their true inner self is what makes Historical Character's so fascinating. William Shakespeare's early life is a mystery. Books and articles publicly state "Nothing definite is known about his boyhood. ...read more.

In fact, during the late 1580s and early 1590s, Shakespeare traveled back and forth between London and Stratford-on-Avon, but by this time, the momentum of Shakespeare's life was toward his career and away from family, hearth, and home. Although we lack hard facts, we may surmise that before he took up a career as a playwright, Shakespeare engaged in a variety of occupations, probably working with his father in commercial trades (leathers and grains), probably working as a law clerk, and possibly serving as a soldier or sailor for an England threatened by Spain. (the-tech.mit.edu/Shakespeare) Shakespeare displays an authority of the dialect and the practices of much such technique, as in his representation of the judicial system in trial scenes of The Merchant of Venice. Shakespeare wrote most of his plays as "quarto texts", on a sheet of paper folded four ways. A few of his works were printed in his lifetime, though they appeared more in volume after his death, sometimes plagiarized and often changed at the whim of the printer. ...read more.

His contribution, not just the Renaissance, but to every person on this earth is one of great passion and pleasure. Being "famous" in the time of Shakespeare was unheard of, only royalty had that honor. By Williams' talent and hard work, he made his name remembered. From having this brilliant manuscript published, having his portrait painted by M. Droeshout and work with the best actors England had to offer, Mr. Shakespeare will always be a well versed "celebrity" in my eyes. His method and style of writing, made me want to continue to act and speak his eloquent words. Most students find his work tedious and boring, but if they only took the time to read for meaning, they would fall in love with the words in front of them. SOURCES: Web: renaissance-faire.com/Renfaires the-tech.mit.edu/Shakespeare TEXT: Civilization Past & Present (11th edition); Brummett, Edgar, Hacket, Jewsbury & Molony. 2006 The Shakespeare Riots: Revenge, Drama, and Death in Nineteenth-Century America; Nigel Cliff. 2006 Tales from Shakespeare; Charles Lamb. Date Unknown. ...read more.