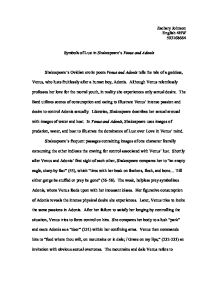 Symbols of Lust in Shakespeare's Venus and Adonis.

Zachary Johnson English 4HW 503168664 Symbols of Lust in Shakespeare's Venus and Adonis Shakespeare's Ovidian erotic poem Venus and Adonis tells the tale of a goddess, Venus, who lusts fruitlessly after a human boy, Adonis. Although Venus relentlessly professes her love for the mortal youth, in reality she experiences only sexual desire. The Bard utilizes scenes of consumption and eating to illustrate Venus' intense passion and desire to control Adonis sexually. Likewise, Shakespeare describes her sexual arousal with images of water and heat. In Venus and Adonis, Shakespeare uses images of predation, water, and heat to illustrate the dominance of Lust over Love in Venus' mind. Shakespeare's frequent passages containing images of one character literally consuming the other indicate the craving for control associated with Venus' lust. Shortly after Venus and Adonis' first sight of each other, Shakespeare compares her to "an empty eagle, sharp by fast" (55), which "tires with her beak on feathers, flesh, and bone... ...read more.

For example, Adonis' "awed resistance" (69) lends him increased beauty in Venus' eyes. This "rain" added to an already swollen "river" (71) causes it to "overflow [its] bank" (72). This passage describes how Adonis' self-conscious unwillingness to cooperate turns Venus on all the more, so much so that her libido and accompanying biological responses run rampant. Shakespeare reiterates this point as Adonis continues to shy away from her kiss. This coyness "bathes" her in "water" (94) while the fires of her passion burn on. The obvious interpretation of water in this instance is again Venus' intense state of sexual arousal, which indicates lust more than the love she claims to feel for him. Further references to water as a symbol of sexual excitement have roots in the passage describing Adonis as a deer grazing within Venus' park. The goddess invites her paramour to "stray lower" on her body to the "pleasant fountains" (234), an obvious allusion to either her breasts or genital regions. ...read more.

However, fire consumes whatever fuel feeds it, in this case Venus' senses, in keeping with the motif of consumption. Shakespeare utilizes fire imagery to communicate the total elimination of Venus' normal restraints in the face of her all-consuming lust for the human boy. Shakespeare's symbols of consumption, water, and fire together serve to illustrate the complete loss of self-control Venus experiences due to her acute lust for Adonis. The passages which contain symbolic eating of the main characters demonstrate that the relationship between the goddess and a mortal will always remain an unequal sharing of power. Lust drives them together, not the ideal of love, despite Venus frequent protestations to the contrary. Both water and fire, typically thought of as polar opposites, serve Shakespeare's single purpose in exemplifying the same point: lust entirely overpowers love in Venus and Adonis' dealings. The profuse variation of symbols which Shakespeare employs to communicate the lusty nature of Venus' pursuit of her human affection show that the Bard fully intends the connection between his various symbols and sexual lust. 2 Johnson ...read more.